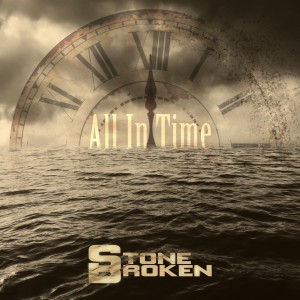 STONE BROKEN
ALL IN TIME
Released on January 29, 2016 (TMR Management)

Review by Metal Mike:
Stone Broken are a four-piece from Walsall, UK. Operating for a little over two years, they have one EP to their credit, The Crow Flies. Their new full length album All in Time was released on January 29, 2016.

Now, I have a confession to make. I like Nickelback. I think they have some solid hard rock songs. Sure, maybe only one or two per album, but they have their moments. “Animals”, “Something In Your Mouth”, “Burn It To The Ground” — some solid stuff there, acutely diminished by their adult contemporary pop rock drivel. Same with Theory Of A Deadman. Not much depth, but how can you go wrong with a song like “Bad Girlfriend?”

All this brings me to Stone Broken. Readers by now know I don’t like comparing one band to another if I don’t have to. Sadly Stone Broken fits the Nickelback/Deadman mold to a T. Song #1 “Not Your Enemy” is pretty good and has a solid, clean guitar stomp. But then I move on to “Better” and it’s more of the same. “Be There” has a southern rock feel to the intro which gets ultimately lost in more of the same. “Let Me Go”, yep same. “Wait for You” might be pretty, but classic Nickelback. And it goes on from there. There’s nothing wrong with every individual song on this album. Each is its own rock song. But if you’ve heard one song here, you’ve heard them all. As an album, there could be so much more this band could accomplish if it tried.

I guess what I’m ultimately saying about Stone Broken is that it’s nothing that hasn’t been done before.

Review by Olivier:
I am not sure if this is an advantage or disadvantage but I had the opportunity to read Metal Mike‘s review of Stone Broken‘s debut full length album All In Time before he invited me to listen to it and submit my own review of the record. Just like Metal Mike, I have to confess that I like Canadian hard rockers Nickelback even though they have never been featured on Sleaze Roxx. However, although I like Nickelback, it is mostly with respect to their one big hit song “How You Remind Me” which reached number one on the Billboard Top 100 back in late 2001.

I remember that Nickelback‘s “How You Remind Me” used to be my “go to” song in late 2001 / early 2002 to pump me up whenever I would drive to a rival squash club to play an inter club match. Although I really liked the song “How You Remind Me” — and still like it to this day — I never got into the band beyond that and found their subsequent single releases to sound awfully similar to each other, rather bland and missing that proverbial punch. As I double-checked my CD collection just now, I noticed that I even own Nickelback‘s The Long Road which was the follow up album to Silver Side Up which contained the smash single “How You Remind Me.” That being said, I don’t think that I really listened to The Long Road more than a couple of times.

All this to say that although I have sort of appreciated the songs that I heard from Nickelback over the years, I have rarely felt compelled to dig a little deeper to discover that group because although its songs weren’t bad, they weren’t that good either! This takes me to UK rockers Stone Broken. Prior to All In Time being released, the single “Let It Go” was released and I even posted about it and the group’s upcoming debut full length album on Sleaze Roxx. Stone Broken‘s uncanny resemblance to Nickelback was quite striking with the UK band’s lead vocalist/guitarist Rich Moss looking and sounding a lot like a seemingly shorter and younger Chad Kroeger (who is Nickelback‘s frontman who also happens to play guitar if you didn’t know). By the time that Stone Broken released a video for the song “Stay All Night” in support of All In Time and I had posted about it on Sleaze Roxx, my interest towards the young UK rockers had started to wane due to the inevitable similarities with Nickelback.

Two months after receiving a promotional digital copy of Stone Broken‘s All In Time, I finally opened the file but it was mainly to send it to Metal Mike to have him review it given my faint desire to potentially have to listen to an entire album of Nickelback sounding rock. After reading Metal Mike‘s review of All In Time, I just knew that this is exactly what I would be subjecting myself to but since he did invite me to submit a review as well, I took him up on his challenge. I will confess having not listened to most of the songs more than once or twice each for the purpose of this review but I really don’t need to listen to do so to provide my opinion. Stone Broken definitely sound like Nickelback but probably have a little more punch to their songs than the rather dull stuff (“Photograph” comes to mind) that I heard on the radio from Nickelback over the years.

I really have to concur (those two last words will always remind me of the movie Catch Me If You Can with Leonardo Dicaprio) with Metal Mike‘s assessment on this one. Every song on Stone Broken‘s All In Time is pretty good but it sure reminds me of Nickelback which is a group that I never really got into. For that reason, my enjoyment of All In Time fades as I listen to the entire album because although I don’t mind a few Nickelback like sounding songs, I don’t want to hear a whole album’s worth of it. Just like with Nickelback, I definitely enjoy the harder rocking songs from Stone Broken over the slower ones that really lack some punch to them. Tracks like “Not Your Enemy”, “Be There” and “Let Me Go” are solid heavier rockers that I don’t mind listening to on a regular basis. I struggle to listen to the ballad “Wait For You” and “Fall Back Down” sounds pretty generic despite its cool guitar riff.

Reviewed by Metal Mike and Olivier for Sleaze Roxx, February 2016