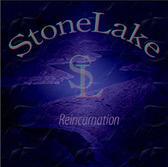 Review:
Fifteen years after originally playing together in Whitelight, Swedish natives Jan Akesson and Peter Grundstrom decided to reunite again under the StoneLake banner. The resulting release, Reincarnation, is a slick slab of melodic metal with soaring vocals and precision fretwork. Several of the songs represented here have keyboards to fill out the sound, and often I am reminded of groups such as TNT.

After the short spoken-word “Reincarnation” the guitars fire up on “You Strike Me With Love”, a song laced with an effective Dio-esque keyboard pattern. Ballad aficionados should love the piano led “All I Need” which reminded me of a sped-up Stryper love song. “Walk On The Rainbow” takes a crunchy guitar sound and blends it perfectly with soaring vocals while “Only One Reason” exchanges the crunch for some stop/start riffing and a keyboard solo that takes one back to Deep Purple‘s masterpiece In Rock.

Even some of the songs that don’t work so well, like “Mistreated Heart”, are almost saved by well crafted choruses. Even though the vocals are sung in a high register (something I usually can’t stand), they aren’t so high that they become unbearable. I still can’t pinpoint who this singer sounds like, as he often comes across as a mixture of TNT‘s Tony Harnell, Rush‘s Geddy Lee and Jon Bon Jovi. All in all this is a very professional release; fans of majestic melodic metal will enjoy it.

Now I just have to figure out where the guitar solo on “Mason” came from, because it just doesn’t fit at all! Reincarnation is one of those albums that will surprise you with each listen – see what you can discover at www.stonelake.se.