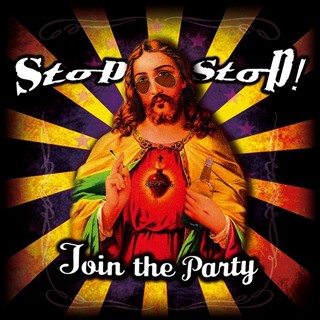 Review:
As my fingers poise over my keyboard, and I begin the hyper critical analysis of my thoughts with regards to this silver plastic disc that is delivering to my senses the music that will resonate in my psyche until the end of my days, I can’t help thinking what to type and ultimately frontman Jacob A.M. appears to me and says, ‘Terry, stop stop!’ Actually, I’m not soft in the melon and I have unfortunately received no visits from any musicians living or dead in quite some time, but the sentiment is true. The bombastic and oh so tasty thirteen tracks off the second effort from Barcelona, Spain (via the U.K.) glam rockers StOp, sToP!, entitled Join The Party, will most certainly stick in my craw like so much aural peanut butter until the mortician ply’s the smile from my face.

Now prepare yourself for lots of praise here kiddies, as the band, the songs, the look and I can only assume the smell of StOp, sToP! is truly out of site. Damn I want to be the fifth Beatle… I mean the fourth member of StOp, sToP! — holy shittake mushrooms can these boys play. Every fill, trick, lead and lick in the ’80s glam rock book are here in spades from the opener “Lost In The U.K.” through the party anthem of “Join The Party” and the not so subtle jab at (you guessed it) posers in “Poser”. “Bad Hair Day” is a killer homage to keeping your chin up even though your hair is not so happening and there is a smattering of sexy numbers in “In ‘N’ Out”, “Lola” and “Love Machine” (with the pre-chorus to end all pre-choruses of “Thousand and thousand of friends, do they like me, well that depends…”). “With You” is a great acoustic driven rock ballad as is “My Friend” and most of the bittersweet “Coming Home”.

I assure you that you will be amazed by the pure craftsmanship of sounds that the trio mold for you. The lead-off single from the disc, the ode to the Peruvian marching powder, “Toilet Party” is just that — a party, one helluva tune, and a knock out video as well. The band reminds me of some really amazing and somewhat unknown bands like ZO2, Mother Love Bone/Malfunkshun (look and vibe), Kix and a few others that have their tongues firmly planted in their rock ‘n’ roll cheeks — or maybe in yours.

As far as the band is concerned, Vega shreds, wanks and plays better than any of your Guitar Player Magazine heroes and be damned if he shouldn’t reside in the company of greatness. Jacob A.M., who I can’t help but say wears the pancake makeup with the best of them, reminds me wholeheartedly of the late great Andrew “The Lovechild” Wood — he was a true glam aficionado and I can tell that Jacob is a purveyor of the glam torch and persona for generations to come. His voice, such a raspy and powerful instrument, reminiscent of Kevin DuBrow, Dee Snider, Taime Downe and others of the raspy growl school of harmony that embodies sleazy good time rock ‘n’ roll perfectly! And let me lastly draw even more attention to the back beat king and mop-topped drummer Danny Stix. Man can this guy beat the living shit out of those skins — and look so damn cool doing it. You will be stunned at the wall of precision that these guys blast out of your Camaro’s Kenwood. I’ve heard tales, and by doing a little poking about the internet, that the band is a sight to see live and are reported to “leave it all on the stage” which is just another feather in their frilly pink boas if you ask me! Fingers crossed that they can get across the pond and do some North American dates.

I certainly don’t plan on StOp sToP-ping to shout accolades about this band and the Join The Party disc… ever — so if that doesn’t sit well with you then I quote Jacob on the song “Poser”, “F@$k off”. If you love, or even enjoy, powerful and well written sleazy glam filled hard rock, delivered with passion and precision, then StOp, sToP! is your new favorite band — it is mine!