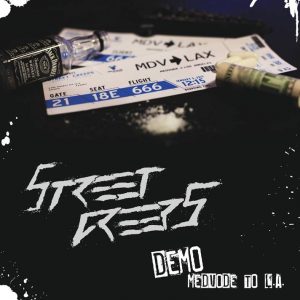 STREET CREEPS
MEDVODE TO L.A.
Released in May 2016 (Independent)

Review:
Modern sleaze rock — that’s exactly what Slovenian rockers Street Creeps — interesting band name — play. I must confess that I have yet to really convert to having modern guitar tones to my beloved ’80s sleaze rock but Street Creeps do a good job with their brand of rock n’ roll with more than a touch of modern tinges. The sleaze rockers show some wit as well with the EP title given that Medvode is the group’s hometown and it’s a long way from Slovenia to California.

With only three songs on their EP Medvode to L.A. — or should I call it Demo Medvode to L.A. — Street Creeps offer what amounts to a sampling of what they can do and I generally like what I am hearing. The best song hands down is “Devil’s Child” which starts off strong right off the gates and actually slows down for the chorus portion before launching into a pretty cool guitar solo. Usually, I am not a big fan of the invariable slowed down portion of a song before it builds back up but on “Devil’s Child,” the group pulls it off quite nicely. Street Creeps‘ lead vocalist N.J.C.‘s singing reminds me a lot of singer Dru Broda‘s voice (of the perhaps now defunct Canadian band Reverse Grip).

The next best track “No Class” starts off with a very modern sounding guitar riff and never lets up. I do think though that a little infusion of a little more melody and less modern sounds would have made the song a lot better and perhaps even the standout one on the EP. The one track that I thought had a lot of potential but somehow didn’t quite harness it all is the second song “Street Rock ‘N’ Roll.” You have the sexy voice of a beautiful hot girl (alright, perhaps not but I’ve let my imagination take over), some cool guitar riffs, even a bit of a bass solo but the singing gets repetitive and I don’t like the way N.J.C. sings on that one.

Overall, Street Creeps show some good potential. Often however, the melodies are sacrificed for what seems to be some modern sounds, which hinder more than enhance the songs. In any case, Street Creeps do a good job of bridging the gap between Slovenia and California, and I would say that they are halfway there with their debut EP Medvode to L.A.!

Release of the first song Devil’s Child by sleaze rock band Street Creeps. Check out and like our FB page: https://www.facebook.com/StreetCreepsBand/Contact…