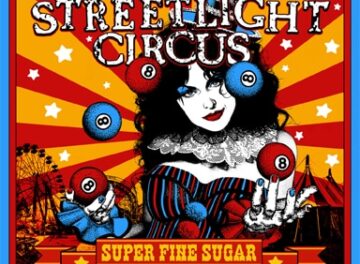 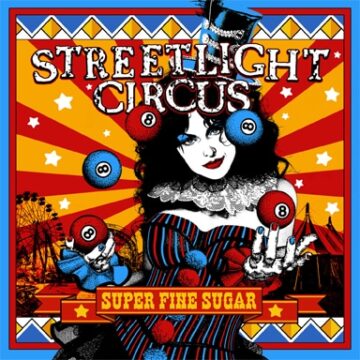 Review:
For the past few years, I’ve regarded New York’s Streetlight Circus as one of the Mid-Atlantic region’s top grassroots-level bands. They’ve released a string of albums independently, toured the nation, and have landed on a plethora of major music festivals all on the strength of their music, strong word of mouth, and a devout fanbase. I was a bit late to the party, with my official introduction to the band not until July of 2021 where they were part of the M-Pre Party in Hanover, Maryland. Up until then, I was familiar with their previous album (Needle Down) but had yet to partake in the spectacle that is one of the band’s live shows.

It was actually at that very show that I first heard new music from their then in-the-works follow-up, Super Fine Sugar. Both “Cherry Cola” and “Take Me To The River” were played that night, with frontman/bassist David Shaw introducing the tracks as a preview of what was to come on the forthcoming LP. Quantum leap to the following year, where I caught the band opening for FireHouse at a show in Leesburg, Virginia. Tracks from the still-untitled album were still making it into the set, but the band had yet to officially unveil the title and release date. Dropping unreleased music into a set can be a risky move, but the flip side to that is that the band can road test material before it’s finalized in the studio and shipped off to label land. To my ears, “Cherry Cola”, “Take Me To The River”, and “Zero At The Bone” were all instant winners and the crowd’s reaction was surely an affirmation, making it a no-brainer that they would make the cut.

Which brings us to September of 2022. Super Fine Sugar was finally released for mass consumption through all digital and retail outlets. Conceptualized and hatched out during the pandemic, the album features a laundry list of guest appearances which should build some hype and generate interest from the uninitiated. In anticipation of that, the guys jump right in at the deep end of the pool with the title track, which is a no-frills, straight up riot that stampedes out of the gate. With its unwavering tempo and kickass drumming by Erik Fehrenbach, “Super Fine Sugar” is a burner that sounds as though it was custom written for the stage. Lead guitarist George Giannoulis rips through a blistering solo on the opening number, which is just too short clocking in at under three minutes. It’s a blow to the head, but in a good way.

Things take a slight detour from there, with the unexpected classic rock feel of “Drive It Like I Stole It”, which befittingly features guitarist Berton Averre of The Knack. I’m not sure why, but I can’t help but think of Meat Loaf every time I hear this song. It’s got that same grandiose, over-the-top pomp to it that I associate with much of that late singer’s classic material. Thick, synth-y keyboard lines do nothing to dispel that comparison and only add to the ‘70s/prog feel. “Cherry Cola” finds Streetlight Circus primed and ready to take over the airwaves. The song, which they’ve been playing live for quite some time now, is THAT infectious. One listen, and you’ll be hooked on it like smack. Despite this being a catchy, radio-friendly single on the album, “Cherry Cola” isn’t maligned with the rest of the record. I would say it’s more of a condensed, amped up version that represents qualities found elsewhere throughout the disc. By no means a standalone jingle arranged for airplay.

As a long-time fan of Denmark’s D-A-D, I was pleasantly surprised to learn that brothers Jesper and Jacob Binzer make a guest appearance. They turn on “Ex Machina”, which is another favorite of mine and it revisits the relentless, rollicking vibe of the album’s opening number with Shaw trading off verses against Jesper’s anguished bark. The Binzer brothers bring with them the same maniacal energy that make D-A-D live performances such an event. Covering all bases, the band can now cross “record a new ballad” off the to-do list. Incorporating elements of Americana into the fold, “Pay My Rent” gives us a breather while George lays out another fantastic, soulful lead on the cut which is a slowdown and teeters into a different time zone. It’s all done tastefully and doesn’t come across as sappy or a tender surrender.

I simply was NOT expecting what came next. Fuzzy, distorted guitars pave the way for a thunderous beat when vocalist David Shaw shares the microphone with none other than legendary TNT vocalist Tony Harnell on the stoner rock collaboration “Dirty Earth”. The first time that I listened to the track, I had to do a double take to make sure it was him! Harnell turns in a very unexpected performance, providing what is essentially a melodic bridge at the chorus and clean harmonization with Shaw elsewhere throughout the song. Surprisingly, he mostly stays in the pocket and sings at a much lower register than we know he’s capable of reaching. All told, an outstanding and inventive piece that has become one of my favorite songs on the record.

After that astonishing offering, I wasn’t quite ready to return to familiar territory. “Take Me To The River” is just that, but not in a bad way. It’s one of the aforementioned songs that I had become familiar with via live shows. I knew what to expect, and “Take Me To The River” is mostly standard Streetlight fare. It’s got the big chorus and sharp hooks that will reel you right into their clutches. While nothing new for them, it’s an excellent song that is a huge asset in its inclusion on the LP. Take note, this is NOT a cover of the Talking Heads classic. Addressing the short-fused and deeply splintered, apathetic mentality that has become commonplace in our nation, “This Means War” falls into the mid-tempo category but is weighted by the darker tone and aim of its lyrics. They aren’t rooted in activism, but rather a sad commentary and state-of-the-union with a “Paint It Black” feel. That mood is also catapulted by the well-placed urgency of the musicianship.

Things then lighten up considerably when KIX legend Brian “Damage” Forsythe turns up on the honky-tonk tinged “Trouble”, lending his blues-soaked guitar riffs to this roadhouse-ready cut. If ever I’m at a bar and a fight breaks out, this is the song that I want playing in the background. With a winding bassline, screaming guitars, and exasperated vocals, what more could you want as the soundtrack to a throwdown? “Trouble” is a backbiter. “Clown Parade” follows and can be filed as one of the more unique compositions to land on Super Fine Sugar. Stop and go time changes, falsetto, and down-tuned guitars give the song a very distinct sound. It features Jon Auer, of the Washington power pop band The Posies. He appears elsewhere on “Cherry Cola”. “Zero At The Bone” has a cool late ’80s KISS vibe (at least to my ears), with vocals that harken back to Paul Stanley near his prime. “Rattle the Cage” brings us to a close, but it’s right in the line-up with the usual suspects found elsewhere throughout the twelve-song effort. The cool breaks in this one give it a distinct appeal, topped off with impressive drum licks by Erik Fehrenbach.

Like many albums, Super Fine Sugar gets better and better through repeated listens. You’ll likely find yourself discovering finer nuances through subsequent playbacks, just as I did. It’s an energized, ambitious effort that sees Streetlight Circus expanding their musical palette and transitioning from a good band into a great band as they ascend to the next tier. Get ready for the big top, the Circus is back and better than ever.

Streetlight Circus‘ “Take Me To The River” video: