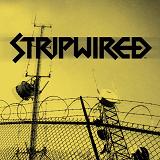 Review:
2007 is turning out to be a banner year for fans of AC/DC inspired rock. The thunder from down under themselves have an ambitious box set coming soon, Dirty Looks have returned, Airbourne and Adrenaline Factor burst onto the scene and now we have Stripwired. Hailing from Dallas, Texas, Stripwired evolved from the AC/DC tribute band Back In Black so it isn’t surprising the path this self-titled CD has taken.

Vocalist Darren Caperna does a dead-on impression of Brian Johnson. If anything he is an even hoarser version of the original – if that’s even fucking possible!! It still amazes me how people can sing like this without screwing up their vocal chords, but God bless ’em. As for the band behind the singer, well, if you know what AC/DC sounds like then you know what Stripwired sound like. Each song is based on simple three chord riffs poured over a steady rhythm, it is a formula that has been done to death, but it is also a formula that almost always works. And it works here.

Some of these songs could have pulled directly from AC/DC albums, in fact when the band says that people mistake these compositions for new AC/DC tracks at their live shows I believe them. For instance, “Break Las Vegas” is Stripwired‘s version of “Safe In New York City” while “Burn Bitch Burn” could be their rendition of “For Those About To Rock”. Yet those aren’t even the stand-out tracks here, for that check out “Doghouse”, the debut single “Another Shot”, “Cat Drag” and “Dirty Love”, the last song containing a hint of Bon Scott attitude.

I don’t think I really have to go into detail about this disc. Fans of what I call AC/DC clone bands will love it, while others will bitch about its lack of originality. As for me, I could care less about originality, I want something that rocks – and judging by the tingling in my spine while “Dirty Love” blasts its way through my speakers I would say this rocks!