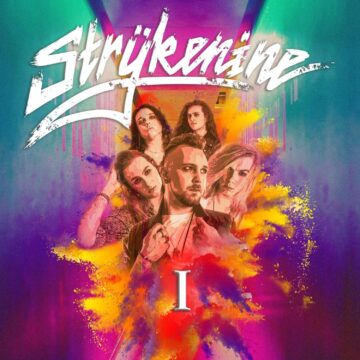 Review:
Following on from their promising 2018 EP Nowhere To Run, Stockholm’s melodic rock poster boys, Strÿkenine unleash their unimaginatively titled debut album Strÿkenine I on the world, and I had very high hopes for this after the hook laden EP. However, those hopes were immediately dispelled with the rather plodding opener “Once And For All” which had the overall feel of a rejected Europe album track. Similarly, “All About Us” passes by in that familiar but over long vein. Both are extremely well played and have the requisite efficient solos to satisfy those who desire them; and singer Jacob Petalamaa has a fine, powerful voice – although his constant vocal gymnastics are already beginning to grate more than a little.

“Toxic” begins with fine work from bassist and co-producer Tony Bakirciouglu and has a terrific, funky Kings X vibe to it and the singer reins in the rather overblown antics of his earlier performances. which is a relief. Sadly, those aspects are back in full force on both the lengthy “Live And Die” and the Bon Jovi styled “Fool For Love” which rather taints the overall quality for me, particularly in the latter song. “Religion” is a confident, rather swaggering track that features more fine playing from all concerned and another, thankfully restrained vocal. “Falling Down” continues that thread although is possibly not as good a song. The mid-tempo, radio friendly ballad “Hold On To You” features fine guitar work from band founder Andi Sarandopoulos and Alex Zackrisson and is surely one of the contenders to be released as a single.

“Better Believe It” is an extended, jam-style track that really doesn’t seem to know if it wants to rock or tug the heartstrings and, once again, the vocals are just the wrong side of irritating. That claim can also be aimed at “All I Need” which features yet more fine keyboard work from Passi Oksman or Patrik Törnblom. “Alive” is my other contender for release as a single although it does rather wimp out at the end and drift off to nowhere.

There is crystal clear production on this album and fine playing throughout from the entire band, but it is the singer’s vocal histrionics and constant Bruce Dickinson style screams on almost every track that renders it a miss for me. Don’t get me wrong, the guy can certainly sing, and if that powerful but fairly passionless delivery is your thing, then fair play. Personally, I found it tiresome in the extreme and, coupled with several tracks that could do with judicious trimming in length, I would say that this had masses of potential but is rather a missed opportunity.

Strÿkenine‘s “Once And For All” single: