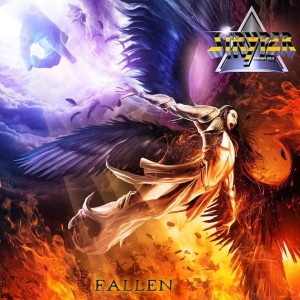 Review:
After reaching the Sleaze Roxx readers’ top album spot for 2013 with No More Hell To Pay, have Stryper “fallen” with its latest release? Hell…. err umm, Heaven’s no! If you have any doubts, one listen to Fallen should erase them all. If anything Stryper are like a fine wine, which continues to improve with age. The production on this album is outstanding, which makes them sound even better than ever.

The opening track “Yahweh” is a powerful rocker. And yes, Michael Sweet still can scream in an incredibly high tone. It’s heavy and yet melodic at the same time. I hear some similarities in some of the riffs that remind me of the heavier tracks on Soldiers Under Command and To Hell With The Devil. Stryper have, once again, done an excellent job of sounding new and fresh while maintaining their signature sound. The title track “Fallen” is an in your face track. It has a heavy darker sound with a catchy choir like chorus. I hate to say it, because it’s not the eighties anymore, but if this had been released in 1986, Stryper might have outsold the Motley Crue‘s and Ratt‘s that were making huge waves on radio and MTV. “Pride” has Michael Sweet asking “Tell me why”? A nice moral tale wrapped up in a slightly more melodic and upbeat song. It definitely has the signature Stryper sound that you will instantly recognize. “Big Screen Lies” has a thundering drum beat that only Robert Sweet can bring. The band hits a nice dirty sounding groove on this track. It’s a perfect fit between the vocals and the music. They sound like they’re all in sync and having fun.

“Heaven” leads the band in an anthem-like song that has the energy and drive to make you take notice. There’s a nice bluesy guitar solo that fits in nicely as well. The opening of “Love You Like I Do” starts out sounding similar to Ratt, but quickly moves into a different direction with hints of that sound scattered throughout the track. I like what they have done with it. Even though, I hear some parts that remind me of other bands, it doesn’t feel like an imitation or a rip off of the other bands, but more of an influence of these other artists style incorporated with Stryper original sound. The one track that I could have done without is “All Over Again.” To me, it sounds like a modern day hair band ballad with a slight country twang to it at times. Musically, it’s tight and well done but it’s just not my cup of tea.

Thank God (no pun intended) the next track after the mushy ballad is an outstanding cover of Black Sabbath‘s “After Forever.” Now you might be asking yourself, “How can Stryper, as a Christian rock band cover Black Sabbath?” Well, I suppose I never gave it much thought before, but the lyrics for “After Forever” work incredibly well for these Christian rockers. It’s interesting how I thought about this song as it was sung by Black Sabbath versus Stryper. It goes to show that it’s all about your own perception of the meaning of the lyrics and what message the band is bringing with the song. This rates as one of the best racks on the album and stands up well to repeat listens.

“Till I Get What I Need” thunders along like an electrical storm of rock to stimulate your ears. Lyrically, I found this one a little bit weak and it’s the shortest track on the album. Musically however, it holds up well and fits perfectly with rest of the album. “Let There Be Light” is another great track that has a little bit of a Dokken feel to it. Perhaps a musical influence from the recent joint venture Sweet & Lynch project, featuring Michael Sweet and George Lynch? Who knows? But it’s catchy as hell… or maybe heaven in this case. “The Calling” is another blast of metal goodness that makes it another one of my favorites on the album. The main riff for this one is outstanding. Oz Fox shines with his guitar playing throughout this entire album. “King Of Kings” is a straight ahead rumbling metal train of Stryper‘s Christian convictions and message of salvation.

Whether or not you are a spiritual person, Stryper will make you believe in one thing… and it’s that they are for real and belong alongside the best of the best in the heavy metal world. Do yourself a favor and get this album now! You will not be disappointed. It’s as good if not better than No More Hell To Pay. This is one of my top ten albums of the year and may even make it to number one before it’s over.