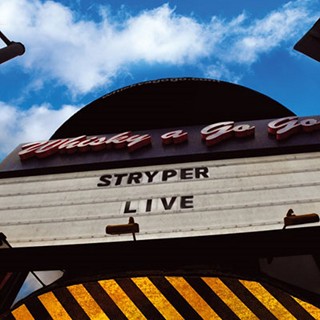 Review:
If there is one band that always sounds really good live, it has to be Stryper. From lead vocalist Michael Sweet‘s piercing screams to the clear and precise sound of their instruments, including guitar harmonies, Stryper always seem to deliver live. I have witnessed it myself three times in the last 15 months (you can check out my last concert review here) and it is therefore no surprise that the band’s latest release, Live At The Whisky, sounds great and has the band firing on all cylinders.

Until I had first seen Stryper play live in 2009, I had always considered them one of the ‘poppier’ hair metal bands out there — based mostly on the ’80s era videos they had released. However, if anything, Live At The Whisky shows that Stryper is far from that and is actually a pretty heavy band live. The song selection on Live At The Whisky is also excellent. You have four songs from their latest release No More Hell To Pay, and arguably the four best ones from that release. All of the Stryper hits are there including “Calling On You”, “Free” and “Always There For You” as well as the band’s heavier compositions and live classics “More Than A Man” and “The Way”. The band closes off their performance at the legendary Whisky A Go Go with their two best known songs “To Hell With The Devil” and “Soldiers Under Command”.

The only track that some might find to be missing is the band’s hit ballad “Honestly” but the reality is that Stryper doesn’t always include it in their setlist anymore and I for one have no qualms with that. The one welcome surprise included with this release is “You Know What To Do”, from the band’s debut record The Yellow And Black Attack. The song fits right in with the rest of the tracks played that night and is a nice surprise for long-time Stryper fans.

I usually don’t comment on album covers but the Live At The Whisky artwork is quite plain and could have been a lot better. I get that Stryper wanted to capture the old time feel of having their name displayed on the Whisky A Go Go marquee, but after the fantastic cover for No More Hell To Pay I was expecting more. At the end of the day it does not matter, as the content in Live At The Whisky is what matters and Stryper strongly delivers in that regard.

For any Stryper fans, picking up Live At The Whisky should be a no brainer. Not only do you get a CD of the band playing live and sounding better than ever, you also get a DVD of that same live performance. For anyone not that familiar with the band, Live At The Whisky is an excellent introduction to the world’s best Christian metal band, period. They are also one of the most professional and best sounding metal bands that are still around, rocking and rolling 25 to 30 years after their ’80s prime.