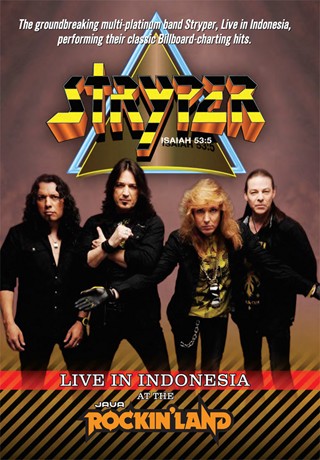 Review:
Christian rockers Stryper rose to fame in the mid ’80s with breakthrough records such as the critically acclaimed Soldiers Under Command and the platinum To Hell With The Devil, which earned the band regular airplay on MTV with the videos “Calling On You” and “Free”. Stryper were lumped in with the era’s ‘hair bands’ mainly because of their image and their melodic hook-heavy songs, but unlike their contemporaries who were singing about ‘sex, drugs and rock ‘n’ roll’ Stryper were spreading their faith through music — and people listened.

Over the years Stryper has disbanded and reunited on a number of occasions. Frontman Robert Sweet has released solo music and was even a full-fledged member of the band Boston for a short period of time. Stryper issued the studio releases Reborn in 2005 and Murder By Pride in 2009, however the new music was a departure from the band’s previous sound — and the new ‘contemporary’ Stryper was a hard sell. In a bold move the band released an album titled The Covering in 2011 which included covers of such artists as UFO, Scorpions, Iron Maiden, Kansas, Deep Purple, and more. The album also included a new track entitled “God”, which was true to the band’s traditional sound.

This brings us to the band’s new DVD release Live In Indonesia, recorded in 2010 during the band’s appearance at the Java Rockin’ Land festival. The set includes 14 tracks heavily dependent on their back catalog, with only “Murder By Pride” and “Open Your Eyes” representing the group’s post reunion output. Stryper are in top form during this performance, the only complaint being Michael Sweet‘s persistent banter between songs that affects the flow of the show. Unlike their 2004 show Greatest Hits: Live In Puerto Rico the set on Live In Indonesia is stronger and the mix isn’t as sloppy. While the audience in the Puerto Rico show was more enthusiastic than the Indonesian crowd they certainly came alive when the band broke into hits like “Calling On You” and “Free”.