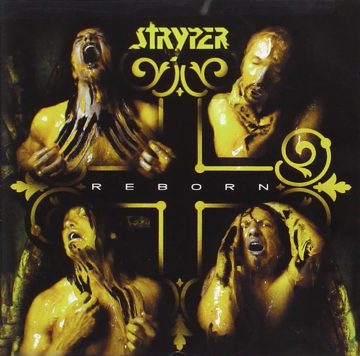 Review:
Many Stryper fans thought the band was done after 1990’s Against The Law release, where most of their Christian followers abandoned the band and criticized them for not staying to their normal “Christian” music, lyrically and image wise. Besides a few greatest hits releases, those that liked the band were reduced to talking about the glory days. According to his book, Michael Sweet was trying to get a solo deal when, after some prodding, agreed to a one-time only reunion tour with the band. After a live DVD and CD, guitarist Oz Fox was so impressed with the music that Sweet had written, he convinced Michael to pitch it as a Stryper release. During this time bass player Tim Gaines decided touring and the band wasn’t for him, and was replaced by Tracy Ferrie, who had experience playing with many Christian music acts.

The result of this became Reborn, a very heavy album, which had the modern influences of the metal scene at the time, with a grunge and nu-metal style. Just like the famous To Hell With The Devil, the original cover had to be used in only certain markets, while Christian bookstores carried another version. Also in the original pressings, the track listings are switched from the order on the back cover (for some of you reading this, my order may be different). I remember being excited to hear this release, because I had gotten back into Stryper‘s music and started getting their back catalog. Needless to say, I was somewhat shocked when I first heard the album as the strong melodic guitar solos and vocals were replaced by darker tones, with singer Michael Sweet having a more gritty style of singing.

The album starts off with “Open Your Eyes,” a great opening track with solid drumming by Robert Sweet. My complaint throughout this release, and with this song, is the total mix production wise. To me, some of the Stryper members’ work (especially Michael‘s solo work) have a flat sound in production and especially the drums. With this said, this is a powerful opener that opened the ears of listeners that this was not the same old Stryper they remembered. “Reborn” has a chugging guitar sound to it, and again, lacks the upfront harmonies that the band used in the past. This is a solid rock song, with my only complaint is the title is called “Reborn” but is barely mentioned in the lyrics, instead using “Born Again.” Maybe that should have been the title. The song just seems to end pretty quickly, where the listener is just getting used to it and it stops.

“When Did I See You Cry” has more vocals on it than the first two songs, with the guitars sounding better in the mix. Just like the song before, once you get into listening to it, it is suddenly over. I usually like shorter songs, where it is kept around the four minute mark, but sometimes the song is so good you’d want it to be a little longer. For me, this is one that stops when I’m just getting into it. Robert Sweet‘s playing on here is nice to listen to, although the snare drum is too flat sounding for me. Track four, “Make You Mine,” starts off similar to something from Mötley Crüe‘s 1980s work  musically, but has the traditional Stryper style lyrics, with lines like “Will you forgive me / Can you forget the old me?” The song is more melodic than the early tracks, with the repeating of one of the lines at the end of the song, which reminds me of something that praise and worship bands in churches would be accustomed to play. This is a song that many don’t list that should be included in some of the a band’s great deep cuts.

My favorite track off the album is “Passion.” Even though I did not regularly play this CD after getting it, there were times when I’d just get the CD out for this song. This ballad is one of the few songs that mentions Jesus Christ in it, and has the theme of a person who is trying to live his life with a successful career but is still unhappy. The opening of the song features just Michael and guitars, which goes back to after the song kicks in for a bit, showing the great dynamics and power of the track. For those fans that only liked the ballads like “Honestly,” this would keep them happy. This is more like the classic Christian heavy lyrics that the band was known for in 1980s. The backing vocals and the powerful lead of Michael is what makes this my favorite track off the release. This is old school Stryper without being dated.

“Live Again” goes back to the darker themes and mood of the album, with the modern style that was relevant at the time. Robert Sweet‘s drumming here is the listenable parts for me, while the lyrics along with the rest of the track makes it one of the weaker ones on the release in my opinion. “If I Die” starts off with vocals effects on it, much like listening to an A.M. radio station. The production on the song is more full sounding, which is a plus for me, but the overall song sounded too much like Bon Jovi‘s “Say It Isn’t So” from the Crush album. The guitars on the song is more of the melodic Stryper style, but this is another song I’d pass over, due to it reminding me too much of one of my favorite Jovi tunes, but not as good.

“Wait For You” is a different song , and was enjoyable for me to listen to when revisiting this for the review. To me, this song has a more pop/radio friendly style to it, almost similar in style to another favorite band of mine, The Georgia Satellites. This has the driving road feel rock style to it. Just under three and a half minutes long, with a pop rock sound, the vocals throughout makes this one of the few light-hearted songs. This is an underrated track off the album that doesn’t get mentioned much from Stryper fans, and is a fun listen, and with a lot of darker tones on the release, this just gets the listener into a fun mood. “Rain” is a track with more stronger keyboards, especially in the opening of the track. This is a mid tempo song, where Michael‘s vocals are drawn out too much for my liking, due to the long lyrics on the verses. However, the chorus is good, and the vocals in the background add flavor to the song, which makes up for the verses overall.

“10,000 Years” is basically a hard rock version of the traditional hymn “Amazing Grace.” Much like the band recorded years ago with “Battle Hymn Of The Republic” from the 1985 Soldiers Under Command release, hard rock fans who grew up in the church didn’t have many outlets to rock out on the traditional hymns, but this is their chance to. The guitars help fill out the song and make it more full. I will admit I do not fully comprehend the renaming of the song this (an ode to KISS‘ ” 100,000 Years” song?)  instead of using the traditional public domain song, but I can’t say anything else bad about the song.

The final track is “I.G.W.T.” a re-working of the band’s In God We Trust. After coming off of the last track, with a remake of a traditional hymn, what is the purpose of ending with a remade version of their own song? It’s not like the band’s core audience had forgotten about the band at this time, having getting a greatest hits and a live CD, along with a DVD, where they’d forget about the song. To me, this is a complaint I have with the ending tracks of the album, with two songs back to back that we already know. I would not have minded if the band just ended with “10,000 Years” and I’d be content, but two tracks in a row that aren’t technically new songs give it a weak ending.

Many casual Stryper fans, as mentioned earlier (especially in the Christian market), gave up on the band with the Against The Law release. After the success of the reunion tour, fans were excited for new material (besides getting a single or two on the greatest hits releases) received a mixed bag here. There are some very underrated tracks on the release, but fans who were longing for the traditional Stryper sound,  may have been disappointed with the darker, angrier, modern tone ( I know I was).

Listening to it now, the album is not as bad as many have claimed; some songs really rock out, and Ferrie holds his own in his debut. The lacking of guitar solos; with the melodic twin guitar sound that made the band legendary, would have to wait for their next release in Murder By Pride, along with the lack of a full production sound makes some tracks sound like demos. Did it have to be as glossy as In God We Trust or To Hell With The Devil? Not at all,. The band didn’t have that financial ties to put into it, like the big sound from the 1980s, however some of the talent of the musicians get lost at times. Although I don’t care for the darker style, there are tracks to enjoy here, and to totally dismiss the complete album would be a major mistake, but overall it’s an album of a few single tracks that’s enjoyable.

Stryper performing “Open Your Eyes” live in Indonesia in 2010: