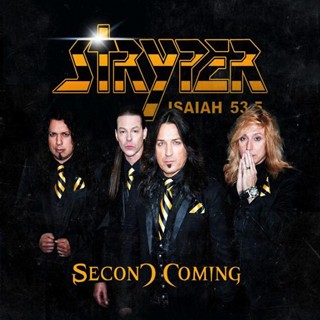 Review:
Stryper‘s ‘new’ release Second Coming consists of 14 re-recorded classics and two new cuts — “Bleeding From The Inside” and “Blackened”. Fans might frown at bands issuing re-recorded material, and it’s a hard sell to people that already own the previous recordings, however this album serves a purpose. Second Coming is a way for the Christian rockers to gain ownership of the masters to these recordings — they can control and license out the songs as they wish, or to whom.

These days, when albums like Second Coming see the light of day, there is usually a bonus disc included with an all new material. But as previously stated, only two new songs are featured on this compilation alongside concert staples like “Soldiers Under Command”, “Reach Out”, “To Hell With The Devil”, “Calling On You”, “Free”, “Sing A Long Song” and a number of deeper cuts. Surprisingly the ballad “Honestly”, one Stryper‘s shining moments and one their most popular songs, was left out of this collection. Also missing is material from Against The Law — though it didn’t sell a lot of copies when it was released it did contain a few gems.

The new recordings on Second Coming have a consistent, rawer, and livelier sound than their slick and overly produced predecessors. Case in point, “To Hell With The Devil”, “Soldiers Under Command”, “Sing A Long Song”, and “The Way” have more bite than the versions previously available. Second Coming showcases the guitar duo of Michael Sweet and Oz Fox‘s stellar, razor sharp and energetic musicianship. Visual time-keepers Robert Sweet and Tim Gaines prove they are no slouches either as their dynamic teamwork lowers a ‘Godly’ bombastic boom. Stryper‘s trademark three part harmonies remain intact throughout Second Coming and Michael Sweet‘s pipes sound ageless.

The two new tracks, “Bleeding From The Inside” and “Blackened”, sound closer to the classic Stryper sound than anything heard on the Reborn or Murder By Pride albums — though when compared to the newly re-recorded classics the new tracks fall slightly short of their mark. Having said that, Second Coming is worth checking out if you don’t have the classic albums or if you’d like to sample what Stryper is all about. As you read this Stryper is hard at work on an album of all newly written material that will be released later in the year — until then witness the Second Coming.