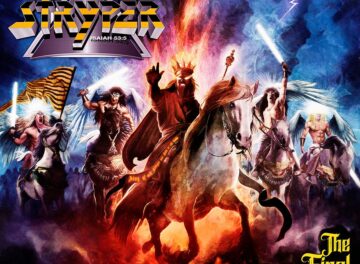 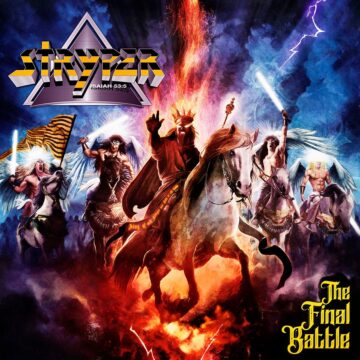 Review:
What can be said about Stryper that hasn’t already been said during the last decade? “Album of the year.” “Michael Sweet keeps getting better and better vocals wise.” “Stryper have reached another level.” Those were three of the comments that I made when I reviewed Stryper‘s previous album Even The Devil Believes (2020), which was voted to the #1 position on the Sleaze Roxx Readers’ Top 20 Albums of 2020 and finished at #2 on the Sleaze Roxx’s Top Ten Albums of 2020. “Stryper are like a fine wine, which continues to improve with age.” “…they are for real and belong alongside the best of the best in the heavy metal world.” Those were the words from Sleaze Roxx contributor Bobby Caughron (who later formed XS Rock) when he reviewed Stryper‘s album Fallen (2015). All these comments can easily be applied to Stryper‘s latest studio album The Final Battle. Yes, it’s that good.

One comment that I made when I reviewed Stryper‘s record No More Hell To Pay (2013) that no longer applies — and even though the album was fantastic — is the following: “I was a tad skeptical that Stryper could deliver the great CD that they were advertising…. but that is exactly what the band has done.” I am not skeptical anymore. In fact, I have come to expect now during this last decade that Stryper will deliver an amazing record time and time again that will be in contention for the album of the year. It’s hard to believe that Michael Sweet is able to come up with such great songs on five straight Stryper albums in a row, especially when you consider that he is involved in many other projects (Sweet & Lynch, SunBomb, Iconic and his own solo work). There goes the theory that it’s better to focus all your efforts on one band and come up with a great record rather than be involved in multiple projects and release mainly mediocre stuff. Truth be told, I find that Sweet‘s writing for Stryper is well superior to what he comes up with for his other projects.

Before I dig into the songs off The Final Battle, it’s worth taking the time to shower some more accolades on Stryper‘s leader, chief songwriter and frontman Michael Sweet. Is there a better singer out there that is in 60s, 50s and maybe even his 40s than Sweet? The 59 year old man continues to give a middle finger to Father Time (just an expression) by consistently coming up with some impressive singing from one album to the next, and in the case of The Final Battle, he may well have come up with his best vocal performance to date. I can’t recall hearing as many screams from Sweet as I have on The Final Battle.

It is mind boggling to have seen some people actually criticize Michael Sweet for the amazing screams that he is able to contribute on this album. What’s the alternative? An over the hill singer that can’t hit any of the notes from an album released 30 or 40 years ago. There are plenty of those types of singers out there but Michael Sweet is not one of them. In fact, when I listen to The Final Battle, I can’t help but think that it will be awfully tough for Sweet to sing those new songs in a live setting. Unlike many of his peers, Sweet continues to push himself in the studio. The same can’t be said for someone like Jon Bon Jovi who seems to have settled on a safe and bland vocal range for his singing such as on Bon Jovi‘s latest studio record 2020.

Interestingly, Stryper were able to choose the best tracks on The Final Battle for which to give the video treatment. I would rate “Transgressor”, “Same Old Story”, “Rise To The Call” and “Ashes To Ashes” as the best songs off The Final Battle and each of them have either a lyric video or video. I am not sure if it was the folks at Frontiers Music Srl or the Stryper band members that made the calls on which songs should have a video but in any case, well done! “Transgressor” is a classic heavy metal track and although it feels weird to say that, Stryper are now more of a metal band than a “hair metal” band in my eyes.

“Same Old Story” has some great melodies and might be the closest to that vintage Stryper sound from the ’80s that you’ll find on The Final Battle. “Rise To The Call” is probably my favorite track off The Final Battle. It has a great guitar riff from which the song is based on and the chorus section will have you singing along in no time. “Ashes To Ashes” might be the heaviest track on the album and once again, you’ll be singing along to the chorus section very quickly. There are really no weak tracks on The Final Battle aside from the ballad “Near” that depending on my mood, I might end up skipping.

A few months ago, Sweet posted a Facebook message where he suggested that Stryper‘s live setlist should consist of songs from their last five studio albums (No More Hell To Pay, Fallen, God Damn Evil, Even The Devil Believes and The Final Battle) along with their two live staples “Soldiers Under Command” and “To Hell With The Devil.” Although I like the earlier Stryper albums, I have to say that Stryper‘s five latest studio records have been so good that I would be totally up for Sweet‘s proposed setlist. I can’t think of any other ’80s era band that I would be excited to see in a live setting if they only played two songs from their ’80s repertoire. In some ways, that’s the biggest compliment that I can give to Stryper for their musical output during this last decade.

I am starting to feel like a broken record when reviewing Stryper albums but once again, the Christian rockers have delivered a record that is more than worthy of the “album of the year” title. This year has some stiff competition for that title so it will be interesting to see where The Final Battle ends up. One thing is for certain, it is definitely one of the top 10 albums of the year.