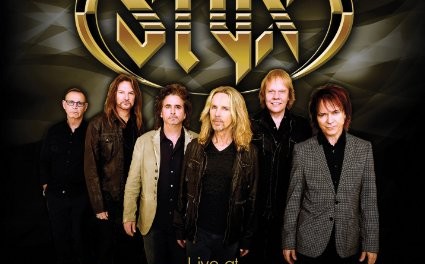 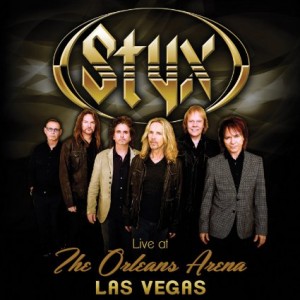 Review:
Styx split with founder Dennis DeYoung several years ago and while most were quick to pan a Styx without DeYoung; one must admit that Lawrence Gowan has worked into his role in the band nicely. In fact, at this point in time there are kids that have discovered Styx and only know that this incarnation of the band exists. Gowan is a fantastic singer, stellar keyboardist and even better showman. Fort those that have been living in a cave for the past several years, Styx is alive, well and touring consistently. The current line-up is comprised of Tommy Shaw (vocals/guitar), James “JY” Young (vocals, guitar, keyboards), Todd Sucherman (drums), Lawrence Gowan (vocals, keyboards), Ricky Phillips (bass, backing vocals), and on select dates Chuck Panozzo (bass).

Their new live album Live at The Orleans Arena Las Vegas is a brilliant representation of what present day Styx sounds like; they’re dynamic, bombastic and even more charismatic than you remember them. All members are top-notch musicians in their own right so you can only imagine what happens when they come together. Live at The Orleans Arena Las Vegas features the hits; “Too Much Time On My Hands,” “Renegade,” “Fooling Yourself (The Angry Young Man),” “Blue Collar Man,” and their signature song “Come Sail Away,” amongst others. Styx is alive, well and selling nostalgia and they do it all so brilliantly. The only down side is that this audio disc doesn’t have an accompanying DVD or Blu-Ray. While Live at The Orleans Arena Las Vegas won’t win them back any of the DeYoung fans that left when the wedge was driven between band and singer; it’s certainly worth your hard earned money.