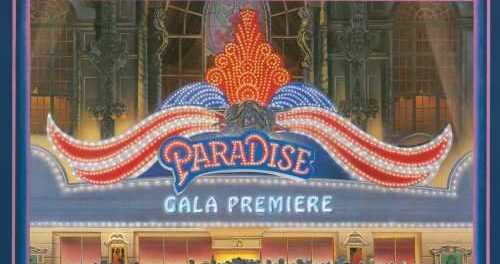 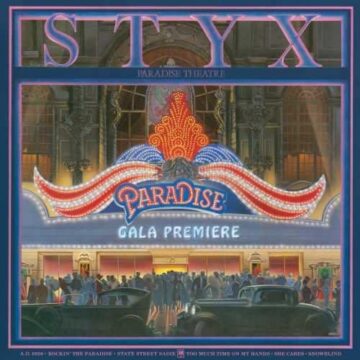 Review:
In 1981, Chicago’s Styx released what would become their fourth straight triple-platinum album Paradise Theatre, which was a quasi-concept release painting a fading picture of America during the turn of the ’80s. Styx‘s most successful record delivered the concept of American struggle at the time under the guise of Chicago’s Paradise Theatre, a magnificent structure built in the late ’20s to stand until the end of time. Sadly by the mid-’50s, the theatre was closed and following a two-year demolition job, left to history until pulled back into the cultural mainstream thanks to the nostalgically creative mind of founding Styx member Dennis DeYoung. Ironically, as this now classic record celebrates its 40th year anniversary, it could serve as possibly a greater example of today’s crazy times and more so than the Cold War American struggles of the early ’80s. The album’s two best known singles could easily be anthems for 2021 — “The Best of Times”, an ode to missed days just a few years back, and “Too Much Time On My Hands”, an ironic commentary befitting of the current climate of forced isolation. Despite the serious overtones though, at the end of the day, Paradise Theatre is simply a great album oriented rock record with great songs created by one of the biggest bands of the ’70s arena rock era.

Released on January 19, 1981, Styx‘s tenth overall release would hold the top spot on the album charts for a total of three weeks swapping back and forth with Reo Speedwagon‘s hit classic Hi Infidelity. Bolstered by the above mentioned Billboard hits “The Best of Times” (#3) and “Too Much Time On My Hands” (#9), Paradise Theatre would complete Styx‘s transformation from international touring rock band into pop culture icons eventually leading to the often parodied and ridiculed “Mister Roboto” from the following record Kilroy Was Here. Regardless of anyone’s thoughts on the band, Styx somehow remained perfect for the early ’70s and even more made for the latter half of the ’70s before morphing perfectly into a more brightly colored rendition of themselves for the ’80s. 1981 was the year Styx bridged the gap between what was the group’s semi-prog arena rock self and the Broadway-esque showtuney theatre direction that eventually led to a splinter between the dramatic musical desires of DeYoung and the rest of Styx who longed to return to the more serious rock and roll they had become known for. Despite being infused with a little bit more pop and modern technology though, Paradise Theatre still rang true with the band’s tradition of penning catchy rock tunes based on current American events.

Much like KISS in the ’70s, Styx throughout their history had remained a band of multiple writers and vocalists. In their heyday, it was the norm for DeYoung to bring forth the band’s ballads and show style songs, founding guitarist/vocalist James “JY” Young the hardest rocking (and often most snarky) of the tunes, with guitarist/vocalist Tommy Shaw delivering a more melody-filled southern rock side fitting somewhere in between. The triple writing threat created a blueprint, that over the top of the rhythm section of the Panozzo brothers John and Chuck, would gel into an unstoppable formula with its final true unified use being on Paradise Theatre.

Becoming the “new kid” in Styx in 1976, Shaw would prove to be the band’s middle of the road missing piece creating songs that to date are must-have pieces of the Styx setlist and in 1981, added his rock meets strummy style to Paradise Theatre via the modern sounding “Too Much Time On My Hands,” and the catchy pop of “She Cares.” Shaw‘s acoustic and electric guitar tendencies offered up more of a glimpse of things to come on his own solo records as well as his part in supergroup Damn Yankees. It’s the side of Styx that captured me most as a kid in the ’70s making Shaw one of my earliest writing / vocal influences.

As Styx‘s resident hard rocker, JY Young might not be known for creating worldwide hits but you’d be hard-pressed to find many a male Styx fan who doesn’t come to life when Young takes center stage in concert. His time at the mic may be minimal compared to DeYoung and Shaw but nearly each time effective and again, JY proves his worth on Paradise Theatre. In 1981, the raw riffs of “Half-Penny, Two-Penny” grabbed my air guitar side to the point that it wasn’t unusual to fling my pretty large boombox around while the song blared out as I walked though the snowy neighborhood in Germany. Add to that the slow, dark grind of “Snowblind” beneath the dreary dimly lit snow covered surroundings, and you have a mood that to this day easily surrounds my mind when playing the record. It sounds miserable like the tunes might intend but for me, even the coldness of the time remains a comforting memory.

The main instigator though of Styx‘s biggest ever release is easily DeYoung whose musical presence in the band has been a constant since day one. With “The Best of Times”, the keyboardist created a cultural pop gem that to this day is impossible to swat away what with its regular presence on retro radio stations as well as featuring on many a film such as Adam Sandler comedy Big Daddy and more recent flick The Perfect Man. Overall on Paradise Theatre, DeYoung not only contributes to eight of the album’s eleven tracks, but he is also responsible for three of the album’s four official singles also writing and singing the almost vaudevillian “Nothing Ever Goes As Planned” and co-writing album anthem “Rockin’ The Paradise” with Shaw and Young. This almost hints at the future as DeYoung sings “Let’s stick together and futurize our attitude.” It can be argued that even as great as an album as Paradise Theatre is, that line alone speaks volumes about the end of the band as the world knew it as Kilroy Was Here would turn out to be far more future than the rest of the band could deal with to try and stick together.

By the time Styx released Paradise Theatre, I was already a pretty big Styx fan nearly going sing-along crazy in a crowd of German kids on the band’s previous tour. Even the first item I ever purchased with my own money – a Panasonic stereo system complete with turntable, cassette player, and AM/FM radio that I paid off on layaway – turned out to cost me more than planned as before I stepped up to the counter to drop off my final payment, I grabbed four Styx records to take home to be the first sacrifices to my new buy. At the time, I might not have been mature enough to realize the deeper meanings of the band’s songs but like all great music that grabs, it was certainly more important that the meanings lent themselves more to my interpretations. The individual mood created in the heart, soul, emotions, and of course overall, need to just move and rock out.

An article I read at the time even asked the question, “What do you think the songs of Styx mean?” And the youthful answers in some ways caught me off guard. After all, my idea of world events at the time revolved around what was going on in my own tiny universe but somehow, the band’s music made sense in its own way in my world. I would imagine it was that way for most Styx fans back in the day. I know for me, much like other anthems of different rock varieties, many of the songs of Styx struck a chord inside me that created uplifting motivation. I guess that’s something music should do. Yeah, in 2021, things may be weird, but as I was reminded as Paradise Theatre played while I was writing this, most might usually consider “The Best of Times” the days of the past. However, the reality is, much like the legend of that venue once thought invincible in Chicago, the memories live on, and continue to grow as we spend year after year “Rockin’ The Paradise.” Hang in their folks.

Styx‘s “The Best of Times” video:

Styx‘s “Too Much Time On My Hands” video: