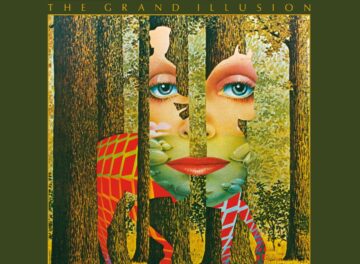 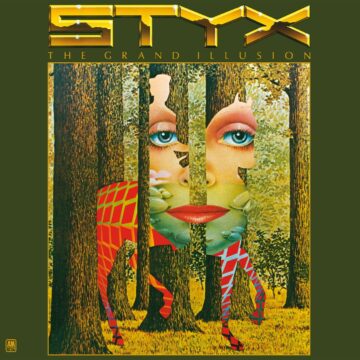 Review:
Even now it’s sometimes hard to believe that breakthrough album The Grand Illusion by classic rockers Styx was actually their seventh release landing a mere five years after the band’s self-titled studio debut on Wooden Nickel Records, but it’s true. Following moderate national success over four releases on that first record label, signing with A&M Record for their fifth, and adding Tommy Shaw on 1976 release Crystal Ball, Styx put all their eggs in the basket, pulled out every lucky rabbit’s foot and finally, in a final act to try and bring as much good luck into the equation, released their seventh album on the seventh day of the seventh month in the year 1977. Seriously. Legend has it that Styx chose the release date for luck and it seemed to have worked as the album, now considered a rock and roll classic, fired the band to worldwide fame and success going triple platinum on the strength of the title track and singles “Fooling Yourself” and iconic pop culture track “Come Sail Away.”

Even in my early teens, the music of Styx struck a chord. While commentary had been written at the time on the deep meaning of Styx songs, I feel now that what appealed to me is more than likely what was appealing to many of Styx‘s younger fans in the second half of the 70’s. Regardless of why their songs were written, the delivery of each captured what some of the best songs of the day offered – an open opportunity for each song’s meaning to be found in the mind of each diverse listener which obviously differed not just depending on mood, but age as well. Certainly someone much older than my then 12-13 year old self found different meaning in society commentary track “Miss America” just as a kid whose entire life existed in rural America read far more different things in “Come Sail Away” than an Army brat like myself, who by that point in my life had already moved around the world several times.

Up until that point, most rock bands of a “serious” nature tended to be more angular and progressive in musically. Styx, on the other hand, somehow managed to mix their serious themes into everything from sing-a-long arena concert rock anthems to stadium arm waving ballads just as perfect for the radio. Of course, it didn’t hurt that Styx was made up of not only great musicians, but like The Beatles before them, multiple songwriters and vocalists all offering their own personality to the mix. Even in the 70’s, that was a rarity and the few who were blessed with the over abundance of talent usually prospered. Now legendary acts like The Eagles, KISS, and of course, Styx come to mind.

It was this convergence of different personalities that found Styx just as enjoyable for me as for my own father making it possible to share in the experience of Styx at its finest live in front of an audience of mostly Germans in 1980. Leaning over the front rail as Styx tore through song after song, not even the magic spell of the moment could keep me from noticing that, despite language (and possibly cultural) differences, each and every person in attendance that night excitedly sang along as loud as I did. No costumes. No smoke and mirrors. Just five guys in jumpsuits on what seemingly looked like a bare stage at the far end of a basketball arena just playing great songs. The only thing different from just a few years earlier was, in 1980, Styx were now one of the biggest bands in the world.

At the start of 1977, Styx was a fairly successful touring act rocking out venues in America and on occasion, Canada. During 1978, Styx was afforded the ability to venture outside of the United States thanks to the success of The Grand Illusion in large part due to single “Come Sail Away” (their second of eight career Top 10 singles) reaching number 8 on the US Billboard charts. With other album single “Fooling Yourself” breaking into the Top 40 and the title track getting solid airplay on stations that played rock and roll, The Grand Illusion would make it all the way to number six on the US record charts taking Styx from national favorites to international superstars in the process. Once in front of audiences, Styx did the rest proving to be a consistently great live band, a boast the band can still claim to this day.

Starting with the epic opening charge of the title track, The Grand Illusion is an album that plays like a good movie catching you off guard when necessary while letting you catch your breath and become comfortable at will. The band’s three main frontmen — keyboardist/vocalist Dennis DeYoung, and guitarists/singers Tommy Shaw and James “JY” Young — take turns holding the reigns while brothers John (drums) and Chuck (bass guitar) Panozzo hold down the fort. Inside the program equal parts theater, film, and rock and roll show.

Perhaps more ringmaster than the rest, DeYoung handles the more theatrical of the offerings delivering the bombastic “Grand Illusion” with extreme showmanship as if to remind all that the grass isn’t really greener eslewhere after all, “Deep inside we’re all the same.” Later on the album, DeYoung perhaps offers the most of the album’s theatricality mentioning not so much the grass on the other side, but beyond the “Castle Walls” where “every man must meet his destiny.” With a haunting melody, it comes well after DeYoung seemingly has left the port via classic “Come Sail Away.” Without the other songs on The Grand Illusion, the two songs could have easily been swapped in order but in the context of the record, it is a perfect fit just as “Come Sail Away” perfectly shows up just in time to bring the first side to a close. Add in last track “The Grand Finale” and DeYoung not only takes charge on half the songs on The Grand Illusion but he delivers them with dramatic effect while still leaving plenty of space for the rest of the story.

Looking to make ears jump to start off the flip side just as the first, rocker JY slams out of the castle with his guitar-driven ode to his sick wife. Thought of by many as commentary of that time in America and even said to “reek of misogynistic misdirection” by Rolling Stone magazine, the hard rocking tune is neither but what most can agree on is, the song simply rocks once again affirming Young as the main rocker in Styx.

The remainder of The Grand Illusion is made up of a trio of airy, flowing tracks from then still new kid Shaw and includes dreamy soul-searching tune “Man In The Wilderness,” the catchy uplifting “Superstars” and second single “Fooling Yourself (Angry Young Man)” which still holds a spot on Styx tour setlists to this day. Vocally, Shaw shines most on “Superstars” with a sincere delivery coupled with a melodic searing guitar solo that is as perfect as found in any Styx tune. Of course, as great as that is, very few Shaw (or Styx songs) can compete with the many spaces of incredible classic “Fooling Yourself.” Even now it draws a huge reaction when played live and I can’t count the times I’ve experienced the band in concert and watched grown men tear up within the first few notes of the song. Some songs (and bands) just touch a nerve and never let go.

The Grand Illusion is not so much a multi-platinum record bolstered by the success of a couple singles. It is a complete album from start to finish. A story that tells different to every listener. A movie that finishes differently no matter if “The Grand Finale” remains the same. Even with bigger albums on the horizon, it remains the height of Styx‘s rock powers, before pop success, before video success, before ego and separate success. Before “Dear John” Panozzo passed away and brother Chuck was moved to divide his bass duties with Ricky Phillips. Before the departure of DeYoung and the additions of fill-in musicians creating a Shaw/Young led Styx, it represents a period that after hearing DeYoung front his own Styx-catalog live band and experiencing the current version of Styx, fans pine for The Grand Illusion of one final dream reunion. One last chance to climb onboard and “Come Sail Away.” One more very last magical hope of a classic line-up tour en route to truly, The Grand Finale.