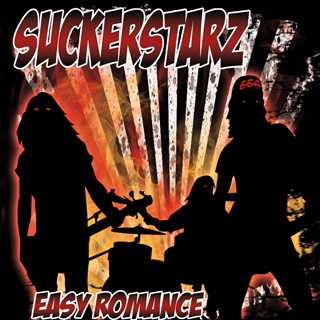 Review:
If you like your Eastern European punk to have a touch of Backyard Babies and Husker Du about it (which I do) then the Suckerstarz might just be what you’re looking for. I must admit that the name of the band had put me off listening to them for the longest while, but now that I’ve given the album a spin I’m kicking myself for not checking them out sooner. With 10 songs, all clocking in at between two and three minutes, there’s no hanging about on Easy Romance, the debut album from Hungary’s bright young things.

This is the best album The Wildhearts never recorded, absolutely chock full of massive hooks and choruses. I bet Ginger‘s kicking himself for not writing classics like “10 000 Miles Away”. The second song on the album, “Down On You”, starts off like a scalded cat, and sounds like a hidden gem from Motorhead‘s Overkill sessions whilst “Got To Try” and “The Last Time” are screaming single release. These two tracks in particular wouldn’t look out of place on an Izzy Stradlin’ record — they have that loose, cigarette dangling from a dry lip feel to them. Easy Romance is very Backyard Babies in places, with their use of wah wah pedal on the mercifully short solos fitting in perfectly in a Slash/Fast Eddie Clarke type way.

For lovers of Husker Du, The Hellacopters, Backyard Babies, The Wildhearts, Cheap Trick and the like, I cannot recommend this album highly enough. It ticks all the boxes regarding power-pop/punk, wears all its influences very proudly on its sleeve and is a great way to fill the void left by Ginger and Dregen‘s respective outfit’s hiatus.

The Suckerstarz‘ Easy Romance could well be the soundtrack to my summer. I haven’t been this pleasantly surprised by something since I didn’t get my head kicked in for suggesting ‘The Shocker’ with the missus.