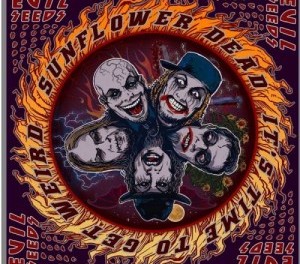 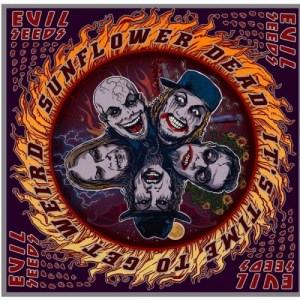 Review:
You might be able to relate to this. You agree to go on the biggest “scariest” roller coaster ride in an amusement park. It seemed like a great idea when you agreed to go on it but as you sit in your seat and the roller coaster car gets to the top, you wonder why you are there in the first place. A few months back, I agreed to review the Sunflower Dead‘s new album It’s Time To Get Weird on the strength of mostly listening at their song “Dance Of Death” rather than watch the video for it. Had I paid attention to the video a little more carefully, I might well not be reviewing this album and that would have been a shame.

When my copy of Sunflower Dead‘s It’s Time To Get Weird having arrived, I was admittedly kind of turned off. The CD cover while certainly neat looking and a step further than KISS‘ Rock And Roll Over album cover, also looks just plain weird and creepy. A ring of fire surrounds the five band members’ cartoon looking heads, which are all painted in white and reminds me of zombies. Opening the CD case to get the CD out did not help matters. Inside is the definition of the word “weird” which includes “informal very strange; bizarre” and “[to] induce a sense of disbelief or alienation in someone.” With these hurdles admittedly stopping the CD from reaching my CD player, I turned to Metal Mike and asked him to review the album. If you watched television back in or about 1978, odds are you saw the Life cereal commercial that states, “Give it to Mikey, he’ll eat anything” or in this case, “Give it to Mike, he’ll review anything.” As it turns out, that was not the case as Metal Mike politely declined to review Sunflower Dead‘s It’s Time To Get Weird.

What became readily apparent as I started listening to It’s Time To Get Weird — which I had forgotten when I heard “Dance With Death” a few months back — is that despite all the weirdness surrounding Sunflower Dead, their music is not that weird and in fact quite melodic and mainstream sounding. Singer Michael Del Pizzo has a great and clear sounding voice which is somewhat sidetracked when occasionally accompanied by a more nu-metal growling type voice from someone else. Del Pizzo‘s singing will likely not get you singing along because there are no real catchy choruses but his melodies nd singing are definitely pleasant to the ear.

If you like one song, odds are that you will like most of them because Sunflower Dead do not stray that far away from their basic formula of heavy yet melodic music highlighted by Del Pizzo‘s voice. My favorite tracks on It’s Time To Get Weird are “Dance With Death”, “It’s Time To Get Weird” and surprisingly the piano based ballad “Nothing.” My least favorite tracks are the more modern sounding “My Mother Mortis” and “I’ll Burn” which seem to depart in a more nu-metal direction. There are some just plain odd tracks on It’s Time To Get Weird that I don’t really count as actual “songs.” The tenth track “Interlude” is a short one filled with sounds of seemingly creaky floors or doors and some background laughter. The last song “Outro” is over seven minutes long but for the most part, I hear… nothing until about half way through the song when you hear a few band members’ voices and then some occasional chatter and laughter… While “Interlude” could possibly be viewed as setting the tone for the darker and heavier “Through My Blackest Eyes”, the “Outro” track should have been left off the album. What a complete waste of seven plus minutes of recording time (and listening time in my case).

Overall, It’s Time To Get Weird would have been a lot better if restricted to ten or eleven songs and without the “Interlude” and “Outro” tracks — if you can call them that. For a band that seems to embrace being weird, Sunflower Dead‘s music is rather mainstream and you likely would never picture them to look like they do if you heard most of the tracks on the album. This is a case where the image does not necessarily fit with the music.