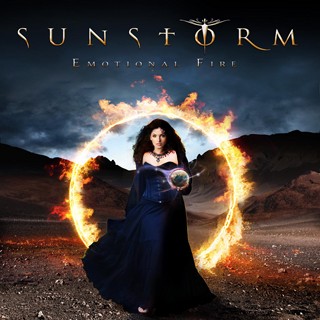 Review:
Fandango, Deep Purple, Rainbow, Yngwie Malmsteen and even Gillette Razor commercials have enjoyed the benefit of Joe Lynn Turner‘s silky pipes over the years — and as he celebrates his 60th birthday, it’s tempting to remark that they ‘don’t make ’em like they used to’. Having said that, Sunstorm‘s third album Emotional Fire revisits a number of tracks that Turner sang back-up on in the ’80s — so they will be both familiar and pleasing to many.

Joe Lynn Turner originally provided backing vocals on Michael Bolton‘s “Gina” (from The Hunger), Cher‘s “You Wouldn’t Know Love” and “Emotional Fire” (from Heart Of Stone), and these songs really serve to provide momentum for a set that’s a little more Sunday than Sunstorm. “Lay Down Your Arms” is the only possible exception due to its welcome departure from the familiar AOR formula that pervades throughout.
&nbspTurner‘s vocals are as impressive as you might expect, and Dennis Ward (Pink Cream 69, Place Vendome) delivers a polished production whilst adding his own bass and guitars. Ward‘s long time band mate Uwe Reitenauer handles the lion’s share of the guitar work, bringing Bruce Kulick (KISS, Union, Grand Funk Railroad) to mind on more than one occasion — which is understandable considering Kulick played lead guitar on The Hunger. Rounding out Sunstorm is Chris Schmidt on drums and first timer Justin Dakey completes the line-up by parping along on the keyboards in all the right places.

The question really though is… why? When you have one of greatest voices in rock why bother recording a dash of ’80s AOR classics that rarely improve on the original, a handful of Rocky soundtrack fillers and an obligatory closing ballad? It wouldn’t have done for his old mate Glen Hughes, and it certainly shouldn’t be so for Joe Lynn Turner. Hey Joe… it ain’t the best a man can get when it ain’t the best the man can be.