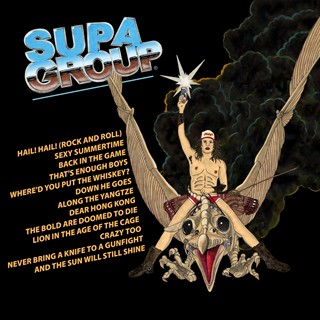 Review:
Rock ‘n’ roll doesn’t come via such a circuitous route very often, but when it does it’s worth paying attention. Being Chinese descended, Alaskan raised, and New Orleans based is quite a mix for the members of Supagroup — even in these days of an increasingly shrinking planet. Now that our geography lesson is over with, is Supagroup‘s new album Hail! Hail! any good? Yes, in abundance — and no in places.

The opener “Hail! Hail!” is pure, balls out, party rock — up there with every kegger party you’ve ever been to. Turn it up to 11, take your shirt off, and run around like an idiot as it’s the best song AC/DC never released. The penultimate track “Never Bring A Knife To A Gunfight” is perhaps my personal favorite from this bunch, sounding so much like 1976 era Thin Lizzy that I’m sure Phil Lynott must have left some demo tapes laying around a New Orleans rehearsal room at some point.

Much of the album reminds me of Aussie rockers Kings Of The Sun, it has that late ’80s vibe to it — a lot of sunshine, beer and good times was had during the making Hail! Hail! I assume. Above all else, this album sounds like it was fun to make. I don’t know if it was or not, but the good time feel the Lee brothers managed to capture along with famed producer/mixer Kevin Shirley sure feels great when you’ve got it cranked up in the car.

There are a couple of flies in the ointment though, and I’m sure this is just because I’m a grumpy old bastard, but at 13 songs the album is about three songs too long. Remove the fillers “Back In The Game”, “Dear Hong Kong” and the album’s closer “And The Sun Will Still Shine” and what you’re left with is a fine, fine rock record.

I like this album a lot — it feels loose, it makes you smile, and it makes you tap your foot and wiggle your hips a bit. That, surely, is what good rock ‘n’ roll is all about.