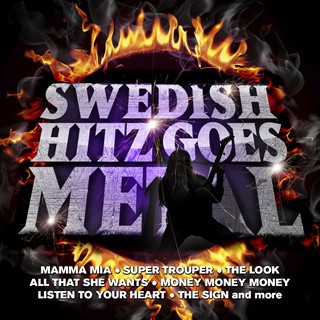 Review:
Swedish Hitz Goes Metal is vocalist/guitarist Tommy ReinXeed putting his metal spin on some tunes by Swedish pop groups ABBA, Roxette and Ace Of Base. According to the Swedish shredder’s press release he “thought it was about time to hear the songs in the way they should have sounded from the beginning”. I do understand the concept that a cover is a cover and the artist changes it so it doesn’t sound identical to the original — but really, should ABBA‘s “Summer Night City” be turned into a dog’s breakfast of a shrieking theatrical shred fest? As a bit of an ABBA fan, my answer is a resounding NO!

One problem here (and believe me there is more than one) is that every song sounds like it’s taken a snort of speed. I get that Tommy ReinXeed is a shred guitarist and possibly a good one, but it’s not just the guitar work that has been smoking crack — it’s everything. This thing is too loud, too full throttle ahead, with too many screechy over emotive vocals that verge on trying to be operatic. The pace of the singing is so fast that at times it’s downright funny.

Onto the songs themselves, the rendition of ABBA‘s “The Winner Takes It All” is awful, as is “Lay All Your Love On Me”. An accent might be expected when English isn’t your native tongue, and perhaps can even add a touch of flavor to a song, but on the latter number ReinXeed‘s accent is so thick and pronounced it is hard to distinguish a lot of what he is singing. There is a lot going on in “Lay All Your Love On Me” and it’s just sounds like a mess.
I’ve never liked Ace Of Base, but congratulations to this dude for making me dislike them even more than I thought I could. To be fair, with horrible songs like “All That She Wants” and “The Sign” there isn’t much to work with, and I wonder why Tommy even chose to cover these in the first place.

As I get close to the end of this disc I just want to scream… WHY? Stop this madness! The closing number, Roxette‘s “Listen To Your Heart”, is a welcome reprieve because it quiets things down about 100 decibels and slows things down by 100 miles per hour. Tommy seems to do the Roxette numbers slightly better than the rest on this hash fest — although bearable, “Joyride” isn’t exactly a joy either.

If there is a market for this stuff, I’m oblivious to where it is. Obviously Tommy ReinXeed thought this was a good idea — but again, I have to ask… WHY?