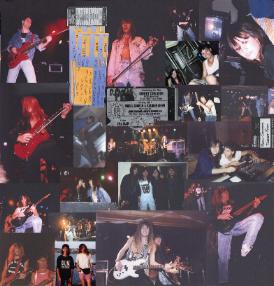 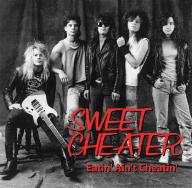 Review:
If some energetic soul was to sit down and make a list of every hair band that got swept aside when the grunge depression hit, not only would he have writer’s cramp but also an endless collection of names. Boston’s Sweet Cheater would end up somewhere on that list and would likely end up being on of the better of the forgotten 80s rock bands.

Sweet Cheater recently reformed (some of the guys still have long hair!) and made an appearance on The Headbangers Basement, and through that connection sent me a copy of their Eatin, Ain’t Cheatin CD. This album is a collection of ten songs that they were shopping to record labels back in the late 80s. Guitarist Tom Flaherty remastered the old tunes and they sound excellent.

So what does Sweet Cheater sound like? They have that typical 80s party rock vibe down, almost like Detonator era Ratt. The opening two tracks would make for some great beach music and then “One Love” drifts into melodic Tesla territory. “It’s Our Love” reminds me of a slower version of Junkyard‘s “Holdin’ On”, and then the group cranks it up a notch with the furious “Dancin On My Grave”. The band seems to be able to go from fun-time rockers to mid-tempo melodic balladeers with ease.

If you like your music in the Ratt and Tesla vein, with a touch of Junkyard and Kix, then Sweet Cheater is the band for you. I wouldn’t say there is much in the way of originality here, but the music is good enough and fun enough to throw on at your next beer swilling party. I’m not sure if this disc is even available for purchase, but if you are interested you can contact the band at www.myspace.com/sweetcheaterband.