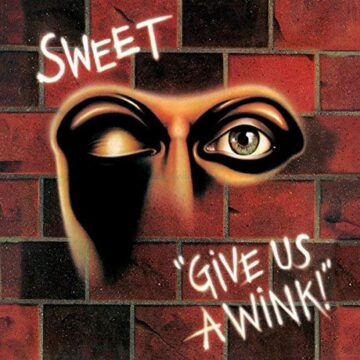 Review:
British glam rockers Sweet (known as The Sweet in its early days) are one of the most influential bands of the genre during the 1970s. Formed in 1968, the talented foursome — featuring vocalist Brian Connolly, bassist / vocalist Steve Priest, guitarist Andy Scott and drummer Mick Tucker — possessed a collective sound that was unique to the era and glam rock in general.

Swimming in a musical sea of groups within the genre that included Gary Glitter, Suzy Quatro, Mud, Slade, T-Rex and even early-era Queen, Sweet’s tunes were based on soaring, four-part vocal harmonies. Known mostly at first as a bubblegum pop band after teaming up with the hit-making songwriting team of Nicky Chinn and Mike Chapman, Sweet achieved early success with commercial hits “Funny Funny,” “Teenage Rampage” and “Little Willy” before changing their sound to a more hard rock style mid-career by penning Top 10 hits “Fox On the Run,” Ballroom Blitz” and “Love is Like Oxygen.”

Give Us A Wink, Sweet’s fourth full-length record, was released on Feb. 16, 1976 on RCA Records in Europe and on Capitol Records in the US. The US version of the record merely flipped the two sides and added “Lady Starlight” as the third track on side two. Give Us A Wink was the first album fully written and produced by the band members themselves after angrily separating from the writing team of Chinn and Chapman, which proved that the band were much more than a cheesy pop rock band with an androgynous stage presence.

Kicking off side one of the Capitol Records‘ version is “Action.” Originally titled “Piece of The Action,” it’s a tune written by bassist Steve Priest about the band’s much maligned management, the overbearing music press and hangers-on all wanting a “piece of the action.” There’s an early demo version that appears on the Live For Today compilation of rare versions and early demos. It has the backwards masking phrase, yet lacks the pulsating opening cello-like synth accents as well as the overall vibrancy that the more polished and far superior remixed version by engineer Reinhold Mack has that appears here. Even inserting the clanging cash register sample midway through the remixed track was a brilliant addition to further the band’s vitriolic statement toward these money-grubbing outsiders.

“Yesterday’s Rain” is up next, and if that massive singalong chorus with multi-layered vocal harmonies doesn’t get you singing your lungs out then nothing will. Besides the aforementioned huge chorus, Scott’s flanged guitar riffs and the solid Tucker drum beat really propels the track along. “White Mice” begins with an energetic riff and a slamming rhythm section, Connolly’s soaring highs are electrifying — especially on the operatic chorus, while Scott’s guitar leads are cascading notes of arpeggiated swirls. Closing out side one is the slow-burning, seven-plus minute Led Zeppelin-esque “Healer.” Decorated with a steady rhythm section, a calculated pace and well-placed synth accents, while Connolly’s passionate vocals lift this song to other worldly realms toward the end of its duration.

Side two begins with the pulsating, sequenced keyboard intro of “The Lies In Your Eyes,” also consisting of infectious guitar harmonies, soaring vocal harmonies and a catchy chorus. The raunchy guitar riffs of “Cockroach” follows it with lascivious lyrics and a dirty swagger. Scott’s guitar solo and Connolly’s vocals here vary only slightly as far as I can tell from the original demo recording on the Live For Today compilation. However, the overall production and mix is much better on the Give Us A Wink version. “Lady Starlight” — the added song on the Capitol Records’ version of the record — is a saccharine ballad-esque song in the same vein as previously recorded Sweet tracks, “Are You Coming To See Me” and “Laura Lee (Show Me The Way”), but I don’t think it really fits in with the other tracks on the record.

“Keep It In” is no doubt one of Sweet’s heaviest tracks ever penned and probably my favorite Sweet track in their whole catalog, sounding almost proto metal in its energetic delivery, while the surreal album closer “4th of July,” complete with a Trevor Griffin piano solo and the band’s soaring choir vocal harmonies, closes out the record adequately. However, I wouldn’t have been disappointed if this track and “Lady Starlight” were omitted from the record and replaced with a couple more rocking tunes instead.

Forty-five years later, Give Us A Wink still stands tall within Sweet’s distinctive musical catalog. Although Give Us A Wink is one of my favorite Sweet records, it comes in just slightly behind the band’s 1974 breakthrough album Desolation Boulevard. However, Give Us A Wink is still in heavy rotation on my turntable and still sounds as rocking and as vibrant as ever.