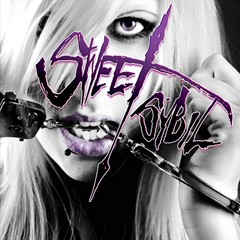 Review:
For its size, Chicago never was a hotbed for hard rock music. Sure, several bands emerged from the Windy City, but when compared to L.A. or New York the city’s donation to the heavy metal scene was minimal. Sweet Sybil are one of those forgotten Chicago bands, forming in 1988 and disappearing like so many others in 1992. It has taken roughly twenty years for Sweet Sybil‘s music to get a proper release, but thankfully these guys don’t sound dated at all.

The thing that separates Sweet Sybil from so many of the other faceless hair-bands that emerged in the late ’80s is vocalist Sam Carava. The guy has a unique voice (to rock music anyway – he reminds me of a pop artist whose name keeps escaping me), that can be touch whiney, but adds a fresh element to the band’s sleazy metal. It is his strong vocal chords that push “Remember When” and “Downtown Suicide” over the edge, resulting in songs that should have made Sweet Sybil underground fan favorites like L.A. Guns, Bang Tango and Faster Pussycat.

“Downtown Suicide”, opening with the sounds of a newscaster and shotgun blast, finds the band at their finest. This song is heavy and sleazy, an almost perfect representation of ’80s sleaze metal. “Remember When” works incredible well too, in a more accessible way, while “Burning House” is a sinister sounding number that adds a darkness to the band’s sound. The final track “You & I” was recorded in 2009 — I assume the acoustic number was written at that time as well because it has nothing in common with the other songs on this self-titled album.

Dedicated to drummer Randy Matthiesen, who passed away in October 1993, Sweet Sybil is an excellent stroll down memory lane. The road to fame and success is built upon broken dreams and failures, but musically there was no reason why Sweet Sybil couldn’t have gotten a little bit of recognition. It’s a shame, but this album would be a great way to close the book on both Sweet Sybil and the Chicago hair metal scene of the ’80s.