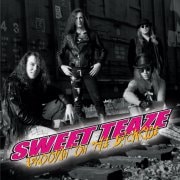 Groovin’ On The Backside captures the sound of an era long gone, and in 1990 bands such as Sweet Teaze were a dime-a-dozen. But those days seem like eons ago and this release is like finding a time capsule and getting chills down your spine remembering the good ol’ days.

This album reminds me of Steelheart‘s Tangled In Reins but without the glass shattering vocals, which cuts the annoyance factor down considerably. If you want rock songs, you’ve got them. “Groovin'”, “Don’t Kick Me When I’m Down”, “Borrowed Time”, “Never Was a Good Boy” and the best of the bunch “Heartless Woman” come complete with guitar solos, heavy beats, catchy choruses and silly lyrics. If you want ballads, they are here too in “Broken Heart” and “Slippin’ Away” which reminded me of Skid Row‘s “I’ll Remember You” during the verses.

I guess you could say this stays too close to the 80s rock formula, but this formula has rarely been implemented in the last 15 years. Once again Suncity Records did a hell of a job, making a small release look like a major label offering. Liner notes, pictures, lyrics and great party music – it’s all here and all dedicated to the departed Mike “Snake” Edwards. Don’t you just wish it was 1990 all over again?