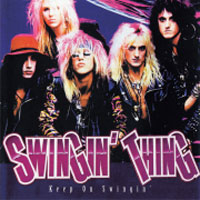 Review:
I seem to remember Swingin’ Thing as being a mediocre glam band, but there is nothing mediocre about this release. Either I had misjudged the band several years ago, or they matured in the time between their self-titled EP and shortening their name to The Things. This collection is comprised of the group’s unreleased second album Things That Swing and eight bonus tracks, for a whopping seventeen tunes in total.

I was shocked at how much vocalist Paul E. Bardot sounds like Rhino Bucket‘s Georg Dolivo at times, while the rest of the band mixes the sleaze of Roxx Gang with the fun pop-metal of Warrant.

Actually, fun seems to be the theme here. The killer opening track “Hazy, Lazy, Crazy Daze Of Summer” is the type of song that should be played while driving near the beach and ogling the beautiful women. It and “Coconut Cream” would have made great additions to B-grade 80s comedy movies like Summer School. Swingin’ Thing comes across like a group of surfer dudes, except that water would ruin their puffed-up hairstyles.

Of course you know an album like this will have its share of ballads, some of which work and some that don’t. “Better Left Unsaid” is one that does work, while “Cowboy On The Run” falls a bit short.

The bonus tracks find the band slightly drifting into punk territory, but songs like “Sugar Shock” and the Aerosmith leaning “Hey Kidd” are still well worth a listen. Meanwhile “Cat’s Got Your Tongue” is one of the best songs on the entire disc.

Suncity Records has released another cool album here, with the usual professional booklets and artwork. If you missed Swingin’ Thing the first time around, or were like me and initially wrote them off, I suggest giving them another shot.