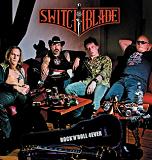 Review:
Three years ago I was raving about a band out of Denmark called Switchblade, and now they are finally back. With a completely revamped line-up, Ken Anthony and company have returned with the same brand of sleaze that they displayed on their debut Switchblade Serenade.

Vocalist and ringmaster Ken Anthony may not be the best singer in town, but what he lacks in range he more than makes up for in attitude. Imagine if you will Motorhead‘s Lemmy fronting a sleaze band such as Circus Of Power and you should get an idea of what is happening on Rock’N’Roll 4ever. Ken cut his teeth as a writer/reviewer for the great music magazine Metal Forces and obviously after hearing thousands of demos he picked the type of rock that suited him best – good old fashioned sleaze.

The new band members (now a five-piece) have really stepped up to the plate on this release. They go from the full-on assault of “Cocksuckin’ Susie”, “Desert Train” and “Dynamite” to the anthemic “Rock’N’Roll 4ever” to the bluesy “Bad Morning Bluez” without missing a beat. Ballads are nowhere to be found, the guys just continually ram straight-ahead hard rock down your throat repeatedly. Denmark’s history is known for Vikings, and this music has that same sort of rough and conquering attitude.

Switchblade is the type of band that would be embraced by a bike gang. Listeners that are cranky from lack of sleep and overindulging in alcohol and meth – hell, Ken Anthony even has the tattoos to match. If you enjoyed Switchblade Serenade you’ll like this one as well, the game plan hasn’t changed.