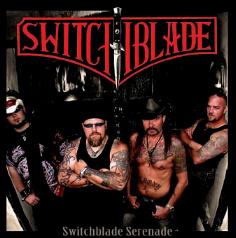 Review:
Earlier this year I reviewed a demo from Denmark that kicked my ass. Well Switchblade has returned with their debut release, slightly polishing up the raw, aggressive and unrelenting sleaze rock that appeared on the demo. Once again they blend together the sounds of attitude-based bands such as The Four Horsemen and Motorhead for some pissed-off results.

The upgraded production gives songs such as “Switchblade Serenade”, “Back Up”, “Live It Up” and “Hate U” a new lease on life and really brings Thomas Lock‘s exceptional guitar riffs to the forefront. There are four new songs on this album that didn’t appear on the demo release, the first of which is “Pumping Beat”. It rivals “Switchblade Serenade” as the group’s best material and hits the nail on the head when it proclaims, “I’m proud to be rock n roll scum”! “Tattooed”, complete with the opening buzz of the tattoo needle, is a hard-driving rocker that adds vocal distortion for an even nastier lyrical delivery. “Down N Dirty” has a hypnotizing AC/DC beat – and how can you not like a song that refers to “sleazy rock”?

“Fade” still doesn’t seem to fit with this band, and out of the new songs “Sentenced” was the only one that didn’t impress me. Perris Records snapped up a gem when they signed Switchblade, one of the best sleaze bands to come around in years. These guys proudly display their gritty barroom influences and are a must have. Check the band out for yourself at www.switchblade.dk.