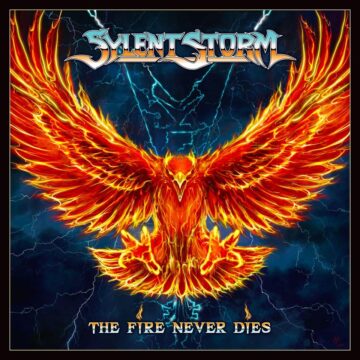 SYLENT STORM
THE FIRE NEVER DIES
To be released on November 27, 2020 (Stormspell Records)

Review:
When a band with an oddly spelled name like Sylent Storm pops up on my review list, I tend to at least be a tad skeptical that what is about to cross my ears is any advertised “traditional” heavy metal, especially if the band in question was formed in the 2000s. Not that I have anything against the more modern act of misspelled name wordplay or the fact that according to my son, it may or may not have anything to do with some sort of video game elf priest, it’s just not what typically comes to mind when I think “traditional” heavy metal. Luckily for me, I am more a music lover than a straight up “anything but metal sucks” fan and I can shake it off and do at the end of the day what any good reviewer should — listen with their ears first and foremost.

Hailing from the state that unleashed bands Black ‘N Blue and Saint on to the world, Medford, Oregon’s Sylent Storm are indeed a hard-hitting group that leans closer to the metallic power of the latter than the poppier hair metal of the former. Yeah I know, to even think of Black ‘N Blue and any kind of metal in the same breath seems ludicrous but hey, I didn’t invent that misnamed ’80s music genre but anyway…

Based on band info, Sylent Storm built their metal muscles on live stages along the way stamping their combined strengths in a self-titled EP in 2014, which lay in quiet wait until being unleashed on CD at the tail end of 2018 and more recently on cassette via Doomsday’s Today / Barf Bag Records. A video for single (and future album track) “Patriots of Metal” would arrive in 2019 along with a new band line-up leading to opening gigs for the likes of Dokken, Lita Ford and Kip Winger. This prepared Sylent Storm for the impending release of The Fire Never Dies, a 12-track platter that despite any oddities to do with their name, is indeed in the vein of “traditional” heavy metal. A quick glance over the song titles hints at such, but the final nail of proof lay in the sounds attacking my ears milliseconds after hitting the play button.

Starting off with second album single (third if you count last year’s “Patriot’s of Metal” video release), Sylent Storm jump out of the gate immediately with the album’s title track. Typically, I am not a fan of records named after a tune on the album except in the case of traditional metal. Heck an old school metal record almost seems naked without a title track and not only does Sylent Storm deliver on that here, out of all the songs, it is the most deserving of the bunch to carry the remainder of the songs into battle. It even has a plodding intro leading to a drop of a break followed by a fast ripping guitar ultimately giving way for double bass drums and just all the aggressive speed and power necessary to grab fans and yank ’em headbanging into the metallic fray. If I dare make any comparisons, it stands somewhere between early ’80s L.A. metal and that same period New Wave of British Heavy Metal with powerful yet clear and concise rhythms, and melodic metal style vocals that are easy to understand. American metal with obvious hints of European influences which in my opinion isn’t even close to a bad thing as Sylent Storm carry it well. If I didn’t know better, I’d almost think that The Fire Never Dies was one of those lost releases by an unsigned ’80s band that FnA Records likes to put out.

Filled with everything from classic galloping metal, Sabbath meets Maiden style grooves, fast attack rhythms, and even the occasional melodic slow end (not to mention breaks for customary instrumental moments), fans of early melodic metal like Queensrÿche, Crimson Glory, Saxon, and the earlier heavier sides of Dokken as well as Black Sabbath, Judas Priest and Iron Maiden should find plenty here to enjoy. Vocalist Jym Harris is more of a straight up singer than screamer or power belter like say Rob Halford or Bruce Dickinson but for Sylent Storm, he is the perfect voice and more than capable whether the music is hard or soft. Mike Pugh holds down the low end perfectly and while I can’t speak for how well he melds with drummer Ray Kilmon (according to info, Rich Psonak laid down the great drums on The Fire Never Dies), the rhythm bulldozes each and every track without any flaw I can pick out. Rounding things out, guitarist Michael Ian Brisbane delivers the perfect balance of hard rock guitar and energy never once giving more than the track deserves. I have always believed that the ability to deliver energetic metal guitar without going too over the top is a rare trait and Brisbane seems to have an incredible handle on that.

If there is a weak point on The Fire Never Dies, I will have to say it can only be found on the production end of the lead vocals. Instrumentally, I love the old school raw yet clear production that is consistent musically throughout the album but on occasion, Harris‘ vocals slightly disappear leaving the moment lacking but even so, not so much to keep Sylent Storm‘s latest from being a great heavy metal album worthy of reaching metal fans globally. These days you only find bands like this in hidden nooks and crannies, stuck in out of the way garages far away from venues that cater to the all-mighty mainstream buck and not to the metal faithful so when one does stick out its snarky head, it’s a pleasant smack across the head. To be honest, in these days of isolation, the metal world needs more of this to remind the frustrated and disenfranchised that if you truly believe and “March Forth”…, The Fire Never Dies.