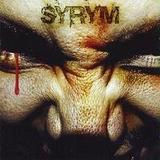 Review:
Rock and Roll the way it was intended to be played. Gritty and unpretentious with a strong southern rock influence, Syrym integrates terrific songwriting with incredible musicianship and an exceptional production. It is the stuff metal heads delight in. This self-titled disc offers up nothing more than a good time. All of the songs on this disc contain catchy hooks, big choruses and enough swagger to satisfy even the most discriminate listener. It really isn’t that surprising considering former Babylon A.D. guitarist Ron Freschi masterminded the entire affair, and even recruited his old partner Jamey Pacheco.

Beyond that though, lies a foundation of great playing that honestly caught me by surprise. These guys can really play. While I feel every song on this record seriously kicks ass, I feel that “Warpath” and “Torn In Two” are by far the two best. So much so that I had to hit rewind and listen to them over and over again. From the very first riff driven notes a groove seeps into your soul becoming so infectious, you cannot help but move to it. Most definitely, they are tunes to be played on a hot summer night cranked to eleven with the windows rolled down.

Honestly, I really dig the entire album, even the slower tempo, almost obligatory, ballad, “What I’m Trying To Say.” The disc ends with a short but very well written instrumental that I feel brings things to a close perfectly.

Bottom line, I enjoyed Syrym and would recommend it without reservation.