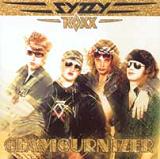 Review:
Germany’s Syzzy Roxx were formerly known as Gamblin’ Crew and describe their sound as ‘poser rock’. My first thought is that these guys are kind of amusing. For a start they have a rather, errmm, unusual look (for want of a better description) and whether intentional or not, the bio on their official site is quite funny. For example part of what they say about their growth or transformation from Gamblin’ Crew to Syzzy Roxx goes like this, “the Crew was yet accused of just honouring the numerous variations of penetration, Syzzy Roxx go further than that. Political topics are being examined, such as the hostage-taking by full bosomed aliens” and so forth. Maybe it’s their sense of humor or maybe something got lost in translation. Either way, it’s all sounds quite odd but you can’t help but laugh.

“Intronizer” is what I guessed, a minute or so introduction to tell us that the Glamournizer is in town. It’s pretty pointless and weird, and it doesn’t really entice me to want to hear the next track. “Glamournizer” itself isn’t a bad tune, its got a cool beat and the vocals are a bit “Balls To The Wall” Accept sounding. Unfortunately this is as good as it gets on this disc. There is this annoying theme of a voice singing/talking in a Darth Vader tone. Maybe its meant to sound evil or alien or something? I really don’t know, but it’s overdone to death here. Then I listen to “Starship DD” and realize they are doing some alien-related thing after all and it’s getting tiresome and boring.

“Hollywood Boulevard” is catchy if you happen to like pop ditties, which I don’t and I’m not keen on the nasal sounding vocals either. “She’s Got Wheelz” (these guys like using Z) is billed as the ‘straight bourbon version’ of the song that appeared on Love Hounds (From Hell!!!) under their previous moniker and it’s not a good rendition. I can’t help but wonder if they were drunk on bourbon while doing this remake because their first version, although not especially great either, blows this one out of the water. This sounds like Johnny Cash gone wrong.

The music behind the not-so-good vocals has potential, but overall this sounds like a demo and the production is weak.

For some reason, I feel slight guilt about not giving these guys a rave review. This is their latest effort so I have to give them points for trying and not giving up. Who knows, maybe they are just doing this for fun but I sure can’t take it seriously. Glamournizer is a definite listen before you buy.