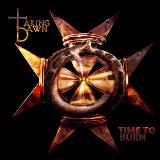 Review:
Taking Dawn just may be rock’s premiere ‘old meets new’ band, as they could easily be a smash hit on current mainstream radio while at the same time impressing old-school hard rock fans. That isn’t a simple accomplishment, and occasionally this Las Vegas upstart steers too far into the alternative direction, but for the most part they successfully walk that fine line.

The title track is a hard-hitting scorcher that has success written all over it — that is if the censors can get over the excessive swearing contained throughout. The chorus of “halle-fuckin’-lujah” may seem a bit gimmicky, but many bands have tried the same type of approach since Buckcherry scored big with “Lit Up” — and in all honesty, to find success in this day and age a band just might need a gimmick such as this. Who cares about that though, the song kicks all kinds of ass and is an exceptional way to begin the CD.

Once in awhile Taking Dawn fall into that boring and predictable sound made famous by faceless late ’90s/early ’00s wonders. Thankfully uninspiring numbers like “Close Your Eyes” and “Godless” are quickly forgotten about with an angst filled anthem like “Fight ‘Em With Your Rock” — which sounds an awful lot like Kid Ego‘s “Heartbreak Hooker”. If that doesn’t convince you of Taking Dawn‘s raw talent check out the ‘wall of sound’ delivered on “Like A Revolution” and “Save Me”, the rapid-fire beat of “So Loud”, the picture-perfect chorus of “Endlessly” or the furious fretwork contained throughout the entire album.

Taking Dawn has the type of sound that could make them famous, even in an era that is mostly unreceptive to new rock music. While Time To Burn did let me down a couple times, the good far outweighed the bad, and I just know that rock fans are going to eat this stuff up as every person I have mentioned this band to have praised them. Like Burn Halo, and to a lesser extent Charm City Daredevils, Taking Dawn has taken a somewhat new approach to hard rock by mixing genres that are often at war with each other in the eyes of fans. Taking Dawn are perfectly poised for stardom as they have a solid foundation to build upon, and I predict the sky is the limit for them.