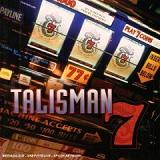 While spinning this CD it becomes pretty obvious why Soto has played with so many groups – he has one of the most soulful rock voices you will ever find. He sounds like a polished Glenn Hughes or a refined Paul Stanley and really is a picture-perfect AOR crooner. So it is no surprise that Talisman is a typical AOR type band – big hooks, strong melodies and a slick sound all delivered in a safe way. This is the type of music that rock radio used to salivate over as the musicianship is top-notch and doesn’t offend.

My personal favorites are the opening “Falling”, “The 1 I’m Living 4” and the emotional “Forevermore”. The best of the bunch is “On My Way”, which is one of the faster tracks and has an unforgettable chorus. The last couple of songs on the disc I could have lived without, but even they aren’t complete throw-aways.

If you enjoy commercial mid-tempo hard rock then 7 will be the perfect CD for you. Imagine former John Norum, Yngwie Malmsteen, Eyes, and Treat (to name a few) members playing Ken Tamplin-like rock and you’ll have a pretty good idea of what is happening on 7.