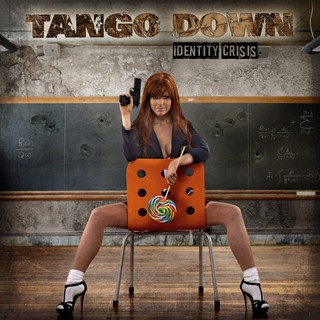 Review:
After a lengthy hiatus, former Accept vocalist David Reece has become one of the hardest working musicians in rock. Between performing with Bangalore Choir and Powerworld, releasing solo albums and Reece/Kronlund efforts, the long-time belter has been expanding his discography at an alarming rate.

On the follow-up to 2009’s Damage Control, Tango Down recruited Reece to replace the departed Alex Barbeiri and welcomed bassist Chris Konys back into the fold. The result is a very satisfying melodic rock album that sounds more like classic Bangalore Choir than that band’s current Metaphor release. Identity Crisis is all about over-the-top harmonies and an endless supply of guitar hooks — not unlike label mates Farcry, partly thanks to the flawless production of Bombay Black‘s Ty Sims.

One thing I noticed right away was how Reece‘s voice has steered Tango Down into a more melodic direction, simply because he is more of a traditional rock singer than the gruffer Barbeiri. It’s not a huge change, as the Tango Down blueprint is still clearly visible, but the slightly mellower direction means the band is a bit more accessible this time around. Of course there is nothing ‘mellow’ about the opening “Crying To Me”, a hard-hitting number that instantly sets the tone with Reece battling the powerful guitar riff for supremacy. “Dream Child” is more of the same before “Blame” slows things down slightly and succeeds with a huge sing-a-long chorus. After a couple of predictable mid-tempo tracks the disc fires up again with the KISS inspired “Hearts Catch Fire”. Ending this impressive album is “Magic Pudding”, a pulsating rocker that puts one final exclamation point on the whole affair.

Identity Crisis is a strange name for this release, because I honestly think Tango Down have finally found their true identity. Hopefully David Reece sticks around long enough to expand on what the New York band have created here, although considering their track record with frontmen I won’t hold my breath. For my money this is exactly the type of music Reece‘s voice is best suited for, and in turn has resulted in the pinnacle of Tango Down‘s short career thus far.