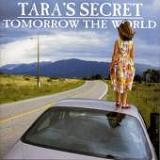 Review:
Tara’s Secret‘s last album starts off well with “Drive Me Home”. It begins with Van Halen-esq “Jump” keyboards and lyrics like ‘rock you like a hurricane’, ‘don’t stop believin’, ‘livin’ on a prayer’ and ‘rock on the radio’ – you get a clue where this British band might get their influences from. I like this song partly because of the impressively clever lyrics using some of our favorite song titles, although of course it still has to be a good song despite cool lyrics, and it is. But also because this has a Meatloaf kind of epic feel and sound to it and for me that isn’t a bad thing.

The following couple of tracks after this one are a bit disappointing. “I Believe” somehow doesn’t sound right. The music seems too fast and out of time for the vocals. It’s just a bit jumbled and messy and the backing vocals don’t sound so hot. “Summer Days” is pleasant and nice enough, but rather dull and quite frankly a tad boring.

Things get back on track with “King Of Meville”. The first chords sound like it’s going to be a Dire Straits type tune, but only for a few seconds, and then it changes pace into a decent rocker. Vocalist Johnny Trowbridge again reminds me of Meatloaf in that he sounds uncannily like him on this number and the song itself is comparable to something that you can imagine Meatloaf being quite at home performing. The song has perfect harmonizing as well. “In Movies” is catchy and “The Light” is a good powerhouse ballad, I’m just not sure it’s good enough to be a whopping seven minutes long! Other songs here aren’t bad, they just don’t kick butt in a big way and are fairly average.

I actually feel like sticking a firecracker in the middle of Tara’s Secret. This is a good band musicianship wise with a confident, capable sounding vocalist in Trowbridge, but I’m left feeling I want more in the style of the three or four standouts on this disc and think they have the potential to come up with the goods. Tomorrow The World is a decent enough offering but it’s nothing especially exciting or original. Tara’s Secret have played it pretty AOR-safe here for the most part.

If you like your melodic rock a bit lightweight and easy going, you should find Tomorrow The World enjoyable listening.