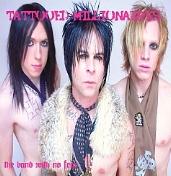 TATTOOED MILLIONAIRES
THE BAND WITH NO FEAR
Released 2005 (Sex Sells)

The Tattooed Millionaires‘ sound is nothing short of what you would expect to hear coming from the Hollywood areas. Sex and lust driven lyrics are only the start to this young band. They have guitar riffs that will forever be remembered and will for sure be classics in the future.

Living the lifestyle of their music is what makes it so good; they have an understanding of the Sunset Strip and of life as young rockers. Songs like “I Wanna Get In Your Pants” and “Rock And Roll Babies” pay tribute to those that influenced their music and gives hope that rock and roll will never die.

The songs are guitar and bass driven hits, each having their own hook and their own style. Not one song sounds the same on the album. The music is rough, sexy and decadent, bringing back the style of bands like L.A. Guns and Poison to a new generation.

The album is called The Band With No Fear and that is just what they are, they dare to be different, put out lyrics that you wouldn’t think of hearing in today’s music industry and have a style that is undeniably there own. The songs are undoubtedly rock and roll with the perfect addition of sleaze and punk to make them the future of music!