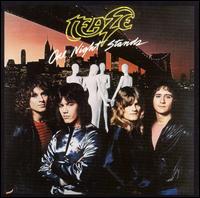 Review:
One Night Stands was Teaze‘s forth album, but the first to get released in the U.S.A., so the pressure was on for this Canadian band. They came out rocking with “Back In Action”, “Young And Reckless”, “Boys Night Out” and the poignant “Heartless World”. Teaze managed to have a sound similar to Boston, but with nowhere near the success.

Sadly though, by 1979 disco had started to dominate the airwaves, and hard rock was passe. The decision not to release a single from One Night Stands pretty much sealed Teaze‘s fate in America. I think this group was good and should have received more recognition, and for that they get two thumbs up!