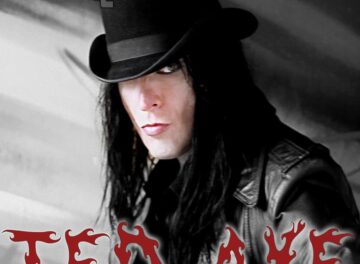 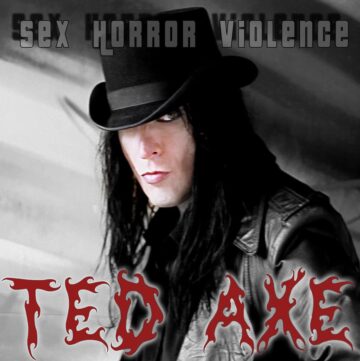 Review:
Apparently, Ted Axe is something of a legend in Canadian punk circles, due to his brief stint as frontman for The Front and as founder member of the equally short lived, but much lauded, Sister Hyde. Mr. Axe now steps out from the shadows with his new, self released collection in a pretty much one man band type of way.

And things get off to a pretty decent start with the sneeringly sinister and almost commercial sounding “Get Out of Rehab” that will almost certainly have an audience immediately on their feet and singing along in any sweaty, intimate live venue. The rather pedestrian “Death Us Do Apart” follows and instantly lessens the impact of the fine openier. The Alice Cooper inspired “My Own Worst Nightmare” is again rather repetitive although it does feature a very fine guitar solo two thirds of the way in. The growling but fairly mundane chant along “Nothing At All” follows, before the tempo is finally upped at long last for the struttingly excellent title track.

Things return to mundanity for the petulant “I Don’t Want To” and the equally forgettable “Hurt People” and seems to adhere to the old adage of sleazy style over substance. The slightly poppy and uplifting “Heaven” follows and redresses the balance somewhat, with its gothic take on a 60’s wall of sound vibe that continues enjoyably through into the fine “Femme Fatal”. “Mother’s Day” is the most surprising track on the album — an acoustic and subtly appealing tale of maternal love that stands out for all the right reasons — in that it is so effective and impressive. The set closes in predictable fashion however, with the sneering but forgettable “T.M.I.”.

It’s cleanly produced and Ted Axe is, as the surname would suggest, a fine guitarist that shows on every single track, and a very suitable vocalist for the material.  The guest drummers Alan Duffy and Steve Crew also add a certain gravitas to the tracks they appear on. The problem lies in the consistency of the songs — when he’s good, as on tracks 1 , 5, 8 and particularly 10, he is a Gothic force to be reckoned with but when the inspiration seemingly deserts him, the songs are unmemorable at worst and generic at best.

I’m pretty certain that this album will divide opinions but if you are looking for a slightly cut price Wednesday 13 and you enjoyed his Gunfire 76 release ,  then you will no doubt enjoy this.just as much. To this reviewer’s ears, there are four tracks I loved and the rest…. well, not so much.

Ted Axe‘s “Get Out of Rehab” video: