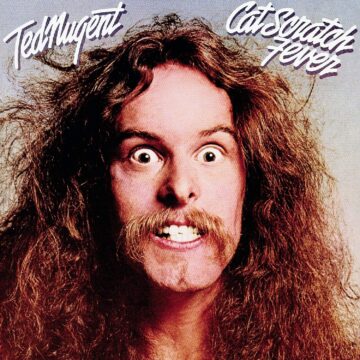 Review:
These days it seems like the Motor City Motormouth spends more time planting foot firmly in face what with his recent jabs at everyone from Joan Jett to… well pretty much anyone who doesn’t agree with his “mow ’em all down and don’t apologize later” political views. However, no one can deny Ted‘s place in wild and loud rock and roll.  Despite reportedly rocking sans the extra punch of alcohol and/or drugs, Nugent has spent the better part of his career tearing across the world like some crazed Chuck Berry attached to a truckload of truck batteries. Sure, he may have traded in his loin cloth and raccoon tail for coverall camo along the way but the rock and roll mission is still the same –- Ted likes to lay in wait until he can leap out and corral the audience and never was he better at it than in the seventies as he set out to catch Cat Scratch Fever across the world in order to run around and pass it on and on and on.

Now I wasn’t introduced to ol’ Ted until 1978 when a bunch of records were picked up for our military housing area youth center in Germany and oddly enough, one of them was live masterpiece Double Live Gonzo – a two album blast of rock and roll insanity complete with no-holds-barred language and intensity. The album cover caught my attention but it was the nasty grooves that stole my soul. So much so that Nugent became a vital part of my air guitar, go nuts youthful rock and roll education. I even picked up the records leading up to Double Live Gonzo in order, first falling in love with the 1975 self-titled release, the ultra cool 1976 follow up Free-For-All and finally, Cat Scratch Fever. Honestly, between those and the rest of his releases through the decade (Weekend Warriors, State of Shock, Scream Dream), I’ve never been able to pick out one as a clear fave so you see, I gotta admit that this particular retroversary record is no better or worse that the rest but yeah, still it holds its own spot in my adolescent heart.

Starting off with the back-to-back blast of the title track and the ripping “Wang Dang Sweet Poontang”, Cat Scratch Fever (the record) starts off like a hissing angry animal although nowhere near as intense as the duos’ live take the following year. One has become a rock and roll classic. A staple of classic rock radio if you will and the other, a favorite of Nuge fans everywhere even if some of us have gone Ted and traded in those old jeans and sans or open shirt look for much more comfortable newer pants and at least a size bigger or two t-shirt. We still get all air guitar happy feelie to the tunes and even at times think we still possess a strong lower hairline and slimmer waistline. No surprise there, two better tunes to kick off an album you’d be hard pressed to find even if it does tire us out quicker in our older age.

One of the things that has always appealed to me about Ted‘s ’70s records is that I can toss ’em on and never wanna skip a track. Rocket science it certainly wasn’t and ain’t but Ted and crew certainly did a great job writing rock and roll tunes and an even better job of placing them just perfectly in order on both sides of a slab of vinyl.  “Death By Misadventure” follows up the double blast of rock and roll coolness with that kinda Ted southerness heard all the way back to his1975 solo start. Cool groove, perfect catchy lead guitar, and in this case, the incredible soulful rock vocals of Derek St. Holmes.  Yeah, Ted had the early vocals of Meat Loaf to bounce off of for a minute an album earlier but with St. Holmes back for Cat Scratch Fever, Ted and the boys found their sound spot on again. That’s not to knock Free-For-All but for my money, Ted and Derek are the tag team rock and roll champs of this gang — no doubt — and it shows as St. Holmes brings the voice again to “Live It Up” while Ted brings the solo guitar goodness. Toss in one of my all-time fave instrumentals in side one closer “Home Bound” and just like that you have a half a slab of old school, arena, blue jeans and beer awesomeness. Ted might not have indulged but dang if his audience couldn’t fill a venue with tons of hair, denim, and… well all the rest of that great ’70s rock and roll stuff.

As if to label that whole experience I just attempted to describe, side two kicks off with anthem “Workin’ Hard, Playin Hard,” an ode to the rock and roll touring life. Yeah, it might have been a communal experience but only the road dogs really know how it went down day in and night out. Why else would you followup such a raunchy anthem with an even more rollicking Ted-fronted “Sweet Sally?” Well, cuz we can or at least Ted can. Of course, he can.

Just as much as the Ted Nugent band was known to rock balls out, they could cut a groove perfect for the ladies to dance to which back then meant a whole lot of bad dancing from the guys but it was cool, it was about the feel not the style right? “A Thousand Knives” lays down that great groove and the lead work between Ted and Derek is obnoxiously cool. Spot on. So Ted ranted about not making some guitar list that Joan Jett made it on? While it comes of as whining, in some ways ol’ Ted might have a right. Listening back, this is some pretty badass guitar rock and roll.

Taking off like early Hamburg Beatles on acid, “Fist Fightin’ Son of A Gun” is a perfect rocker to head down the final stretch and into the rolling of album closer “Out of Control.” Might be talking a fist fightin’ son of a gun but this is a double fisted case at that. Lots of raw rock and roll, crazy guitar solos, wailing vocals, a rhythm section worthy of mowing through a crowd in a way that Uncle Ted would be proud. It’s rock and roll and bless my soul, it’s out of control!

When I saw this one on this month’s retro review list, my nostalgic teen self aimed straight toward it with an excitement only reserved for the most special of childhood memories. A feeling bordering on giddy. As with every review, I like to put the vinyl on and each time I am in awe of how much the music still resonates within me. Every one has their own rock and roll that goes there and for me, there seems to be a ton of it. Decades even. Listening while gearing up to write this, I feel no different. The Ted Nugent of my youth still sounds great, feels great. Now all these years later, it still feels great to catch a little bit of “Cat Scratch Fever.”

Reviewed by John Stoney Cannon for Sleaze Roxx, May 2022