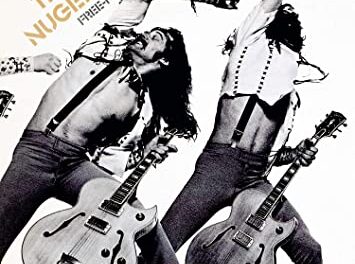 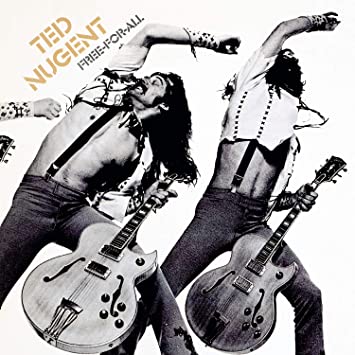 Review:
Whether it’s spewing about rock and roll, women, hunting, politics, ol’ Uncle Ted Nugent has never failed to weild the biggest of mouths and that’s cool. After all, it’s part of why we love him and crazily enough, why at times we hate him and often why we roll our eyes when we just see his name or picture in the press before we even have a clue what he’s being mentioned about. Hell, his mouth might be the only thing louder and wilder than his big ol’ cranked up, distorted big ass hollow body guitar. Back in the ’70s, both were lethal enough to leave behind a rash of Cat Scratch Fever cases on a whole diddle of Wang Dang Sweet Poon Tang making for a whole mess of cock rock that would draw out scores of bare-chested, denim clad red-blooded American male Weekend Warriors looking for all kinds of crazy Schlitz (and chicks) to get into. Come the bicentennial year of our rock and roll lord, ol’ Ted was already blazing a post Amboy Dukes fire across concert stages on his way to taking over with the following year’s triple platinum Cat Scratch Fever record but in 1976, the wildman was just a mere moment into cranking up what was gonna be his second double platinum rocker, Free-For-All. And for an overly-opinionated dude like Ted who from day one hasn’t really cared if it blasts into other folks’ safe space or property, Nugent‘s then latest record was more than properly titled.

Nuge would spend his most successful period creating face-melting rock and roll on his first three solo releases with guitar/vocal partner in crime Derek St. Holmes aside from a brief period during the recording of Free-For-All when the unhappy couple split up for personal and creative reasons. Enter in surrogate vocalist Meat Loaf still about a year away from riding Bat Out of Hell into legendary rock lore. “Wait…THE Meat Loaf you say?” Yep, all three hundred or so Rocky Horror Picture Show pounds of him. But for those not familiar with Free-For-All, open your ears. Despite a quick look over the tunes followed by a few fly by the seat of his pants sessions, the results ended up being pretty badass. Yeah, St. Holmes is perhaps the perfect straight man to Ted‘s loud mouth but man, tossed into the vinyl mix with less than a handful of tracks between Nuge and Derek, ol’ Meat not only held his own but fit in like he coulda been a full-on member of Team Ted. Yeah, the seemingly odd mix turned out nearly pretty perfectly amazing. Lemme ‘splain.

So of course, even with such vocal talent as Mr. Loaf and Mr. St. Holmes, Ted rarely is one to let someone else step to the front of the line and this time, big elbows his way to belting out the classic title track of his second solo offering. Nugent might not have the vocal chops of his fellow band singers but one thing has always been certain – dude always knows which songs are perfectly gonzo for his own pipes. Sure, he usually squeezes in a few more but on Free-For-All, Ted muscles in, slams home a winner, and then gets the hell out of the way to leave Meat Loaf and St. Holmes to do their vocal best to top it. Honestly, while top it they might not have done, they surely both complimented it. Besides, at the end of the day, a Ted Nugent record is more about sarcastic attitude and guitars and as with most of his classic output, Free-For-All has a great gonzo amount of both.

One great thing about the majority of solid rock and roll records in the ’70s is that most were all killer, no filler, and at least in the eyes of Ted‘s fans, his were killer than most from coast to coast and every stop in between. You seriously can’t get a better follow up to the title track then the St. Holmes fronted “Dog Eat Dog” featuring not only catchy lyrics but some pretty cool chainsaw guitar ala 1970s style. St. Holmes might have been M.I.A. for most of the creation of Free-For-All but as was the usual case on Ted‘s records, his mark was firmly made. Yeah it was Ted‘s name, guitar, and image on the cover but again St. Holmes‘ voice played an important part even if in minimal supply. That probably made his return come tour time at the request of the record label a tad easier.

Just three songs in and Free-For-All is delivered by a trio of lead vocalists this time with soon to be worldwide sensation Meat Loaf grabbing the mic on “Writing On The Wall,” a slowish grinding rocker along the lines of “Stranglehold” from Ted‘s previous self-titled release. Complete with signature bellowing guitars, it’s another example of Ted‘s ability to churn out a good groove which for audiences in the ’70s made for pretty fuzzy-headed sway moments. Despite his own claims of laying off the stoney stuff, Nugent wasn’t so stupid as to not realize what the average rock audience was about. Even the most mellow of Grateful Dead audiences would groove to a bit of “Writing On The Wall.”

St. Holmes jumps back in again to close out side one with balls out rock and roll anthem “Turn It Up” which in straightforward, uncomplicated Ted fashion is simply what it sounds like – a three chord, amped up Chuck Berry inspired rocker loaded with guitars and visions of loud amps and concert audiences. Not sure if and how often ol’ Ted pulled this one out in concert but talk about a song perfect for a loud night of rock and roll! Yeah, Ted ain’t gonna let side one end without reminding you that there’s still rocking to be done. A whole second side of it to be exact. That first side full of Ted-penned ditties but now on to the flip side with tunes mostly delivered by the rhythm section of drummer Cliff Davies and bassist Rob Grange and almost all belted out by Meat Loaf. That’s right, that’s right. Even St. Holmes makes a single vocal visit on side B and not Ted but it’s cool. The Nuge swagger and guitar is still all over and more than enough to crush your head.

Not falling too far from the “Dog Eat Dog” tree, second side opener “Street Rats” chunks out the gate with every bit the groove of a classic Nugent tune. While ol’ Meat surely does a mighty fine job, it easily could have benefited from that little bit of extra blues punch St. Holmes would have given it. Yeah yeah, it still rocks and there’s still that Nugent guitar thing happening but in a rare moment on Free-For-All, that St. Holmes energy is clearly missing but again, it’s cool. We all know how perfect Derek was to the Nugent sound back then but from here on out, Meat holds down the fort not to mention, St. Holmes plugs into the middle of side two for a bit of assistance.

Known mostly for loud and crazy over-the-top gonzo rock and roll, over the years, Nugent has only on occasion delivered the tender side of Ted. Rare moments like 1979’s State of Shock track “Alone” are few and far between but thanks to Davies, Grange and the eventual legendary power ballad vocals of Mr. Loaf, Ted and company deliver a lost classic rock gem with “Together.” The opening bass groove and guitar is enough to draw the hairs high off the arm and then Meat Loaf starts to sing and man oh man, talk about chills. “Together” is loaded with everything classic ’70s rock and roll was and is about blending the best of what made bands like Skynyrd, Styx, Bad Company, and of course Ted Nugent bad ass on record and on stage. OK so it’s a little bit different than usual crazy Ted fare but for those familiar with stuff that came before Free-For-All, it’s not totally unbelievable.

As previously advertised, St. Holmes pops in mid-second side with the boogie woogie rocker “Light My Way” belting out a tune with all the ’70s vibe of a Foghat track before a down the stretch groove reminiscent of Elton John‘s “Saturday Night’s Alright For Fighting” guitar lick. Sure, it’s nice to hang with Derek again for a sec and there’s that bit of energy and of course the guitar but listening back, years later, you almost feel like he phoned this one in. Well back then, I guess he might have sent it via telegram. Not bad, not bad at all but still, not quite as kick ass as St. Holmes was capable of but of course, there was tension at the time so, maybe just a case of the “whatevers?”

Down the final couple of laps to the finish, Ted leaves little to chance manning the passenger seat with Meat Loaf at the wheel,  and with Davies and Grange holding down the low end. With a bit of four to the floor punch and blistering rhythm guitar, “Hammerdown” is just about everything a hard rock song should be and often I have thought that in the hands of some of the ’80s heavier bands, it could have made for one helluva metal anthem. If you’re not sure what I’m getting at, put this one on and try to imagine W.A.S.P. tearing through it as Blackie Lawless spits out every line. Heavy I tell ya… he-veeey. If as a Ted fan that idea makes you nervous, no sweat, Free-For-All polishes off with the Davies-penned “I Love You So I Told You a Lie” leaving things off right smack in the middle of Ted musical territory. The only thing missing here on this cool track though is the obvious – while Mr. Loaf does a great job — it’s tough not to hear St. Holmes on this one. Even so, a great song complete with catchy chorus and despite not being written by Ted, it still has that sense of Nugent sarcatic snarkiness.

In 1976, Ted Nugent was deep into the second album of his post-Amboy Dukes rebirth on his way to a place in ’70s arena rock history. Sure, there was more to come including the surprising yet cool time in Damn Yankees with those harmonious Styx and Night Ranger guys as well as a shit-storm of controversional commentary having to do with everything from politics to guns, but in the mid-’70s, Ted was simply, pure rock and roll ass kicker Ted Nugent. Legendary songs were still on the horizon and killer records Cat Scratch Fever, Weekend Warriors, State of Shock and the face-melting Double Live Gonzo still to come, but by the time Free-For-All dropped in 1976, Nugent was already a concert and rock festival fan favorite of them bare-chested, blue jean wearing, cheap beer drinking American dudes. He was already working on becoming a draw overseas too and after years of work, wasn’t gonna let something like a bit of tension between he and St. Holmes derail that train.

Reportedly, St. Holmes was none to happy with producer Tom Werman‘s production and bailed prompting the producer to toss a meager $1,000 at Meat Loaf to not only sing over a couple days of studio sessions but also prepare with solely lyric sheets. Even with the minimum of tools to work with, the results speak for themselves as Free-For-All to this day still stands as a classic album in the Uncle Ted catalog. In all its “Dog Eat Dog,” “Turn It Up,” “Hammerdown” glory, Free-For-All was loudly the “Writing On The Wall” of things to come from Ted Nugent as if Gonzo himself had seen the future and chose to give the world plenty of warning.