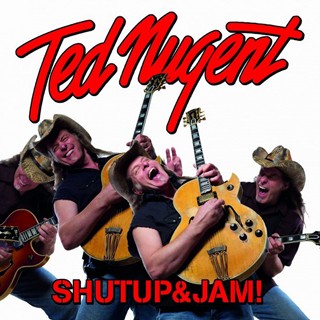 Review:
The award for most ironic album title in the history of modern music goes to Ted Nugent, a man who has never been afraid to voice his opinion on any subject. You likely won’t find a more polarizing figure in rock than the Motor City Madman, who can single handedly rally his dedicated troops and alienate his detractors with the blink of an eye. Personally I don’t care what Nugent‘s political views are, and for years have secretly wished he would do exactly what this album advertises — shut up and jam!

I’ve always enjoyed Nugent‘s music, and while his recent releases have been hit and miss they always offer a few guitar driven gems — Shutup&Jam! is no exception. The title track kicks things off in furious fashion and is one of the album’s highlights. However the lyrics of “enough of all that political stuff, right left good bad it all gets boring and old”, precisely summarizes one of Nugent‘s biggest flaws — if only he took those words to heart. I also enjoyed the short duet with Sammy Hagar called ” She’s Gone” — I was beginning to wonder if the former Van Halen frontman still knew how to rock, but this track proves he hasn’t forgotten. The positive message and distorted guitar work of “Never Stop Believing” should make in a live staple from years to come, but the album’s best two tracks are shoved towards the end. “Do-Rags And A .45” sounds like it came from the Weekend Warriors sessions and “Screaming Eagles” is pure, unadulterated Nugent — both tracks take you back to the guitarist’s classic out-of-control sound.

The biggest disappointments on Shutup&Jam! are the least expected ones. “I Love My BBQ” had the potential to work but just comes across as silly — perhaps Nugent should stick to ‘poontang’ and forget about cooking. Even more surprising is “Everything Matters”, the only track sung by longtime cohort Derek St. Holmes. While St. Holmes was a huge part of Nugent‘s early success (maybe even more than some would like to admit), this song just doesn’t excite in the least and sounds stuck in the late ’70s.

I’m not sure why I bothered reviewing this album, because his legion of fans will eat up anything the gun-toting rocker delivers while the haters who believe Nugent represents everything wrong with America will dismiss the music without even giving it a listen. That’s the corner Nugent has painted himself in, and nothing on Shutup&Jam! is going to sway one’s opinion of the man himself. It’s a shame really, because Nugent has put together an impressive catalogue of music over the years, but by being unable to ‘shut up’ his mouth has started to overshadow his guitar prowess. On a purely musical level Shutup&Jam! is pretty good — by no means is it perfect, but it offered enough hard hitting, guitar driven rock to keep me satisfied through several listens.