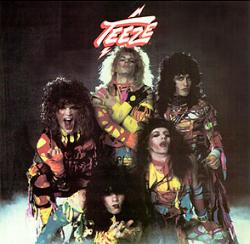 Review:
While awaiting the upcoming Motley Crue disc why not pick this CD reissue by Teeze up, because chances are this slab will sound a lot more like classic Crue then the original bad boys themselves. Originally released in the mid 80s, the band has re-issued this album with a few additional songs.

I never agreed with “Party Hardy” being the debut single for this release. Sure it is a fun pop-rock song, but it isn’t very indicative of what Teeze actually sounded like. The rest of the album takes a darker glam meets sleaze route and ends up producing some fun party rock anthems in the process. Some of my favorites are “Midnight Madness”, the powerful “Somewhere Someway” and the dark riffing of “Leave Me To Burn”. You can also include “On The Run” and “Crank It Up”, two songs that succeed due in part to their infectious choruses.

One thing I found interesting was that the bonus live tracks are both over ten minutes long, not what one would expect from a band that specialized in the stick-it-in pull-it-out three minute romp.

Teeze may look utterly ridiculous image wise, but the 80s produced several weird looking outfits that played satisfying music – Teeze is one of them. Whether you will enjoy this album or not really comes down to one question – do you like the early definitive Motley Crue? If you answer yes then I suggest you pick this forgotten 80s pearl up, because Luis Rivera sounds identical to Vince Neil (and he even sings ALL the words on the live tracks!). All the information you need on Teeze (and their later name Roughhouse) can be found at www.roughhouse-teeze.com.