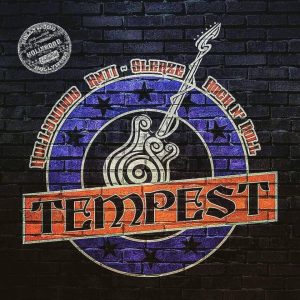 Review:
Hollywood Anti-Sleaze Rock N’ Roll? What the fuck? Why would such an album be sent to and reviewed by a website such as Sleaze Roxx? The four song EP was shipped to the Sleaze Roxx office — or more like postal box outlet — and I actually played the album prior to noticing that its title was Hollywood Anti-Sleaze Rock N’ Roll. A little background research revealed that Tempest are either a Christian rock band or a rock group made up of Christians.

I usually never talk religion in an album review for Sleaze Roxx but will make an exception. I don’t get it. As a Christian myself, I don’t understand why a rock group decides that a certain form of music is “wrong” and that seemingly, its music is better than the rest. This is particularly the case for “sleaze rock” that for the most part does not really deal in any form of occult worshipping of any kind so why does Tempest seemingly target “sleaze rock?” If you want to sing about Jesus and the power of God, more power to you. But to do so while seemingly putting other forms of music down seems contrary to what Christianity is really all about. Didn’t Jesus say, “He that is without sin among you, let him first cast a stone at her.”

Interestingly, the most successful Christian based rock and roll or heavy metal band has to be Stryper whose frontman Michael Sweet probably holds the record for most interviews (four I believe in 2011, 2013, 2013 and 2016) with Sleaze Roxx in the last five years or so. Michael Sweet has my respect because it seems obvious that he does not find “sleaze rock” threatening in the least and does not feel the need to bash “sleaze rock” to get ahead and his message through. Tempest on the other hand do exactly that with what has to be perceived as a carefully planned title to seek media attention and get ahead while putting another form of music down.

But enough about religion. What about the songs themselves on the EP Hollywood Anti-Sleaze Rock N’ Roll? Like I stated earlier, I listened to the album a couple of times before realizing the album’s title. Hollywood Anti-Sleaze Rock N’ Roll starts off on a very promising simple but effective classic rock like guitar riff during the song opener “Back To The Hill.” The whole song is actually built on this guitar riff and even the singer’s limited vocal delivery does not deter from the overall great feel of the song. If every track was as good as the album opener, this could be a winner. Unfortunately, this is not the case. “Back To The Hill” with its rather laid back classic rock pace and feel is actually the fastest paced song on the four-song EP. “Hello God” is actually a pretty upbeat song and would work well with a better vocalist. The Tempest singer’s limited vocal range and raspy voice simply just holds the song back. The ballad “Every Time It Reigns” falls in the same boat. The singer’s limited vocal delivery and rather rough voice makes the song more annoying than anything else. “Walk Away” is more of the same. The wrong voice for a potentially good song.

By now, you’ll have noticed that I am not sure who the band members are because the EP copy that I received does not indicate who the band members are but does point out who took care of the mixing, mastering and “creative direction.” The group’s Bandcamp page for the album does not assist much further but I gather that the artists that are playing on the album are Mick Rowe, Steven Veninga and Frank Gagliardi. Overall, I like one out of four songs on Hollywood Anti-Sleaze Rock N’ Roll and the three slower songs that I dislike could potentially be saved with a much better vocalist. As far as the “anti-sleaze” title goes, it seems like a cheap way to try to get some attention. Perhaps I missed the boat on exactly what Tempest‘s message was with its album title Hollywood Anti-Sleaze Rock N’ Roll. I may well find out now that this review has been published.