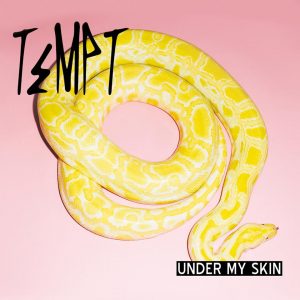 Review:
For those that have been off the grid for the past two years or just selfish son of bitches such as myself who don’t like to share, I bring you not only the soon to break group of barely above drinking age New York rockers Tempt but I give you their highly praised and deservedly so EP Under My Skin.

The band, as the story goes put this little jewel of an EP together to hock at the Rocklahoma show they played at and it has been building a great deal of momentum with their infectious songwriting and skilled musicianship ever since. It also doesn’t hurt to have a your EP blessed by the hit maker Michael Wagener, but alas I could mix these tunes up and they would be golden as they are nothing short of killer.

The lead off and title track “Under My Skin” is an anthemic rocker that is equal parts melodic and heavy, reminiscent in the lead riff of Jake E. Lee and his contribution to the Ozman‘s “Ultimate Sin” cut. Vocalist Zach Allen does a great job with in-canting and incorporating the likes of Jeff Keith of Tesla and Joe Elliott of Def Leppard fame. He is a young man of great vocal talent with equal parts crooning and swagger. He sings brilliantly herein and in the remaining cuts on the EP. Next is “Use It Or Lose It” which has a massive chorus and gang vocals, and a great ’80s reverb mix that all the bands were running back in the day and of course Harrison Marcello solos like a man possessed.

“The Fight” with its huge amount of keyboards and catchy rhythms is so very “Runaway” by Bon Jovi that it is almost a sin, but a good one. The chorus is catchy as heck and would be a killer arena rocker as again it is chock full of so much ’80s goodness with the production, players and vocals. You won’t believe it was just written a few years ago but rather in 1982 and then vaulted ’til now. Last up is the ballad “Time Won’t Heal” which is a staple for every album in our music collection back in the ’80s. However, this one has some modern twists with its orchestrations. It could easily be used for sporting events or on some Idol like show for the moments we view — the ones that don’t quite make muster and we see the montage of the dejected. Superb!

Over the past couple years, the band has been playing all over and honing their skills. Allen and Marcello have remained static however they have recruited a new bassist and drummer. The band is currently in cahoots with Rock Candy Records finishing up their long awaited full length release date soon from what the interweb is saying. We shall see how the production goes, but according to the leaked track listing, the four songs from this EP are to be included.

I am looking forward to what these upstarts are going to do next and I very much like this new trend of EPs to entice and then full-length to completely floor us. Think Station with their EP Wired and self-titled full-length, and you will get the gist. Enjoy!