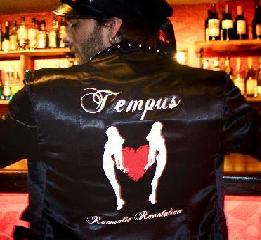 Review:
Romantic Revolution is one of those albums that doesn’t really impress you at first. But with repeated listens some of the songs have grown on me, while others still leave me cold. What confuses me with this release is the different vocal sounds, sometimes they do a cool glam impression and the next they sound like Jethro Tull‘s Ian Anderson, which is a weird mix for what is billed as a ‘glamster rock’n’roll band’.

“Dollar Devil” is a catchy bouncy song with 70s garage-rock guitars mixed with a bit of current day punk. “Miss My Lady” is probably the best song here (although the distorted and super-charged “Red Dragon” gives it a run for its money), it is simply a great pop-rock song that is lots of fun.

On the other hand songs like “Metal Machine” and “Feed The Stars” don’t work for me, mostly due to the vocals – the gloomy “Will He Survive” doesn’t work at all. “Sergeant” is one of those tunes that is saved by the chorus.

I could likely split this CD up in two equal parts, parts consisting of the good and the bad. Musically I really have no problem with Tempus‘ retro delivery, but as I stated earlier the vocals sometimes rub me the wrong way.