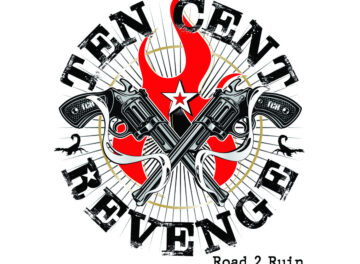 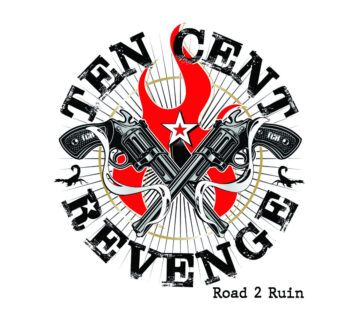 Review:
As soon as I heard the title track for Ten Cent Revenge‘s debut EP, I just knew that I had to purchase it. I still get goose bumps when I hear the opening acoustic guitar melody from Bon Jovi‘s sublime ballad “Wanted Dead Or Alive”, and the acoustic guitar intro to “Road 2 Ruin” lefts off a similar Western cowboy vibe. The song builds up quite nicely with the raspy lead vocals from Joshua Decker leading the way, and it ends with a fevered pitch and what sounds like a fast paced piano sounds towards the end. The only question in my mind was whether Ten Cent Revenge could come up with five other great songs or at least tracks that could come close to the title track’s brilliance.

The good news is that all five of the remaining tracks on Ten Cent Revenge‘s debut EP are good to great. The bad news is that none of them come close to matching the title track’s brilliance. That being said, all of the songs on Road 2 Ruin are very enjoyable and I like them more and more each time I listen to them. This is easily for me the most played CD of 2023 (keep in mind that we are only on Day 13 for this year). Although I recognized one familiar name in Ten Cent Revenge‘s line-up — consisting of lead guitarist Steve Favela (Color of Chaos, ex-Bang Tango) — make no mistake about it, the architects behind the band are bassist Greg Turner and lead vocalist Joshua Decker who wrote most of the songs between them. In fact, Turner is the one who engineered, recorded and produced the entire EP.

Speaking of Decker, he has a bit of a sinister voice at times which fits the songs’ moods quite well like the opener “Are You Ready” and even the second track “Hollywood.” With respect to that latter track, for a little while, I was thinking that “Hollywood” might be a cover from Color of Chaos‘ album Hollywood but as it turns out they are different songs. One of my favorite tracks off Road 2 Ruin is the song “Ten.” It has some great melodies and will have you singing along in no time. It also has a very ’80s guitar riff to start off. “Eden’s Burning” has a bit of an Iron Maiden feel to it at the beginning before turning into a really enjoyable rocker with one of the better guitar solos on the EP. “My Life” closes the EP and has a more modern feel to it with the guitar work at the beginning and during the verses. Although it’s not my favorite, it does have a catchy chorus with the words “My Life” and the “Hey Hey” parts are a nice touch.

It’s obvious that the Ten Cent Revenge guys don’t take themselves too seriously as is evidenced by their two videos (for the tracks “Hollywood” and “Road 2 Ruin”). There are guest appearances in their videos ranging from Pretty Boy frontman Steve Summers in “Hollywood” to former Badlands bassist Greg Chaisson and ex-Megadeth bassist David Ellefson in “Road 2 Ruin.” The guest appearances don’t stop there as the group has a whole bunch of special guests appearing on their EP including bassist Tony Franklin (The Firm, Blue Murder), guitarist Mark Knight (Bang Tango) and guitarist Brian “Damage” Forsythe (KIX, Rhino Bucket). Unlike for example Streetlight Circus who seem to have heavily promoted their various special guests that appeared on their latest album Super Fine Sugar, Ten Cent Revenge seem to have taken a more subdued approach in that regard. Frankly, I like Ten Cent Revenge‘s approach much better. Let the music do the talking rather than try to ride the coattails of your special guests.

It’s good that the Ten Cent Revenge band members seemingly have a sense of humour because I am pretty sure that they were less than pleased when their batch of CDs came in since the song order does not match the song list on the back cover of the EP. It took me a while to figure things out but already knowing the song “Road 2 Ruin”, it was easy to see that at least one song was not where it should be (based on the EP’s back cover) and later on, I realized that the songs “Eden’s Burning” and “Ten” should be swapping places as well. In any case, I suppose that the CD that I have will be a real collector’s item if by some miracle, the EP ends up selling millions of copies and the subsequent batches of CDs are corrected.

Overall, I am very impressed with Ten Cent Revenge‘s debut EP. The songs feel gritty and somewhat raw yet they have some great melodies and will have you humming along. I am hoping that Ten Cent Revenge will keep going and release more albums at a faster pace than Favela‘s other still active group Color of Chaos whose only album dates back to late 2018.