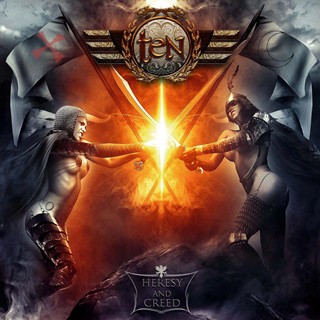 Review:
Man, does this new album from Ten take its time building up steam! After an obligatory intro to the band’s tenth studio album we get three songs in a row topping six minutes (and a fourth narrowly skirting that length at 5:56), none of which are exactly up-tempo prog workouts. “Arabian Nights” is the closest any of them get to a hard rocking stomp, but even then you sense the band holding back… it kind of feels like singer Gary Hughes informed the rest of the band, ‘hey, I’m feeling a little sluggish today, let’s take it down a notch, why don’t we?’

That vibe persists throughout much of Heresy And Creed‘s sprawled out 69 minute running time. Hughes seems to be going to great lengths to avoid raising his voice, singing throughout in a low, simmering register — which works fine on deliberately mellow ballads like “Raven’s Eye” and “Another Rainy Day” but leaves erstwhile rockers such as “Gunrunning” and “Right Now” wanting a bit more oomph. It’s a shame, as the songwriting is all class and overachievement, and the musicianship — especially new guitarist Dan Mitchell‘s leads and fills — is top notch. But the tempo gets stuck in a major rut, strangely only coming to life (and relatively at that) on the back nine, with Hughes finally waking up a bit (again, relatively) on “The Priestess” and “Game Of Hearts”.

Ultimately, when taken as a piece, Heresy And Creed simply fails to deliver the goods consistently. There are a number of classic vocalists who typically keep to a mellow, unfussed register to great effect (Chris Cornell and Robert Palmer immediately come to mind) but Hughes just doesn’t have the nuance or the personality to make that kind of restraint his stock-in-trade. He’s never had the greatest range in the world, but at least on classic Ten tunes like “The Name Of The Rose” and “Spellbound” you could hear him use his diaphragm to good effect. On Heresy And Creed he seems to be largely going through the motions, rending any number of potential classics flat and limpid. A shame, really, but not entirely a wash for die hard Ten fans.