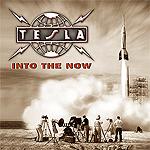 Review:
It has been ten long years since Tesla‘s last studio album and a lot has changed in the world of music during that time. The musical climate isn’t the only thing that has changed though, Tesla has as well. Several songs on Into The Now stay true to Tesla‘s roots while others forsake their trademark melodic metal in favor of a more updated aggressive approach – with varying results.

The debut single “Caught In A Dream” ranks up there with Tesla‘s finest material. It is an acoustic ballad with a chorus that burrows itself deep into your head – Jeff Keith hasn’t missed a beat. “What A Shame” takes a similar approach as the single, but is slightly heavier. “Words Can’t Explain” starts off mellow before picking up steam, with guitar dueling reminiscent of southern rock’s finest moments. “Come To Me” is another melodic number that displays the group’s ability to produce catchy and memorable hooks.

With Keith sounding so convincing I can’t understand why the band would want to put annoying effects over his voice on the disappointing “Heaven Nine Eleven”. Songs such as “Look @ Me” and “Got No Glory” have the band displaying their updated influences, but leave me unimpressed. Not surprisingly I enjoy the retro tunes far better than the modern sound, and there is more than enough here to keep me happy. I also find myself enjoying the mellower numbers more, which is unusual. Tesla in the 21st century is a welcome addition to any rock fan’s collection, check the band out at www.teslatheband.com.