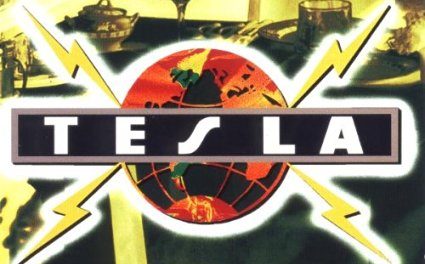 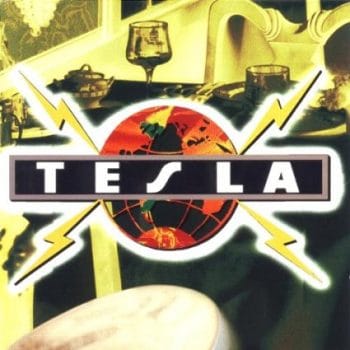 Review:
“Put this in your pipe and smoke it!”  – Tesla, “Change In The Weather”

And with that, Tesla launches into something truly unique. Like nothing they’ve done before, Psychotic Supper is a creative stretch. Coming off their successful Five Man Acoustical Jam, Tesla were exploring faster tempos, new themes, and unleashing each band member’s creative potential.

Psychotic Supper is Tesla’s third studio album, and their most diverse by far. Certified platinum in the USA alone, it ranked as high as number 13 on the Billboard Hot 200. “What You Give” landed #7 on the Mainstream Rock Tracks, while “Stir It Up” hit #35 on the same chart in 1992.

This album is so unique, that it’s almost impossible to encapsulate in a few paragraphs. I really don’t know where to begin, so how about at the beginning? “Change In The Weather” is the first track, and immediately tells you that Tesla are heading in a new direction. A southern twang with hard rock vibes, plus the attitude that comes with confidence. “Edison’s Medicine” tells the original Nicola Tesla story — how he was duped by Thomas Edison and the whole debate between AC and DC electrical current. It’s almost a Discovery Channel documentary. Not the best rock song, but great lyrics.

“Don’t De-rock Me” is a blazing tune that talks about what people want to hear. “No time for fucking around with mediocrity, takes everything I’ve got just trying to be me.” It’s surely not a classic, but it’s balls out rock. Things slow down a bit with “Call It What You Want”, and some great lyric work. It’s a love song with a bite. Love my music, love me. “You can call it heavy metal, punk, pop, or thrash, you can call it anything, it don’t matter to me.”  I married the girl who quoted me those lyrics!

Slowing it down is “Song & Emotion”, written for ‘Steamin’ Steve Clark — R.I.P. — guitarist for Def Leppard. A soulful, heartfelt tribute in the beginning, which blows up into a hard rock song that really isn’t a tribute as much as a self-serving filler song. “Time” is, to me, another bit of filler that has no message and nothing to distinguish itself. I never understood why 30-something bands would sing about teachers and school days. “Freedom Slaves” has a bit of soul to it, and I get the lyrical content.  The song is heavy enough, and the musicianship is excellent, but I’ll chalk this up to an added extra.

“Had Enough” could also be in the also-ran category, except I love the guitars and the moody arrangements. Tesla are renowned for opening their shows with the song “Cumin’ Atcha Live”, but “Had Enough” could also work as an opener. “Me and the boys are gonna rock tonight, drinkin double shots and feeling fine….”

The next two songs define this Tesla album for me, even more than “Change In The Weather.” I’m not one to get excited about ballads, but “What You Give” and “Stir It Up” are absolutely fantastic songs. Both are heartfelt, genuine, touching, and well written. The band knew what they were doing when they wrote these two songs. Think a combination of “Little Suzi” and “Love Song.” As much of a banger as I am, they form valuable entries into my regular playlists.

“Can’t Stop” has an appropriate slow build from those two ballads, and really sounds like something off previous Tesla albums.  Yet it, too, explodes into a crescendo chorus and does have its flaws. Finally, we get to “Toke About It.” There is some truly amazing musical lines in this track, from the off-time drumming, to the guitar noodling, and even Jeff Keith’s vocals. This song is so much fun on so many levels. Tesla may like toking, but they were clearly sober when recording this song!

My final analysis of Tesla’s Psychotic Supper is that it is 80% fantastic and 20% average. The musicianship throughout is unbelievable, and the writing is first class. Yes there is filler… or at least a few songs that don’t stand the test of time, 25 years later. But I have to admit, with the exception of the Five Man Acoustical Jam, this is my favourite Tesla album.

Tesla‘s “What You Give” video:

Tesla – What You Give