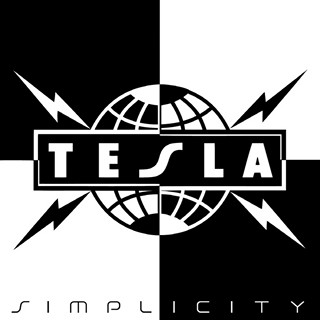 Review:
It seems like all the ’80s glam and hair metal bands are reforming and releasing brand new albums. Festival tours are popping up all over the place, and ’80s rock is experiencing a resurgence and rising from the dead. Yet another one of the legendary ’80s bands, Tesla, has stormed back onto the scene with their latest studio album Simplicity — and in honor of the album’s theme this will be a simple review.

Even though it’s been six years since their last release, Simplicity makes it seem like Tesla never took any time off. It falls into succession alongside Mechanical Resonance, The Great Radio Controversy, and Psychotic Supper with its heavy, guitar driven blues and good ol’ rock ‘n’ roll. Singer Jeff Keith sounds like he hasn’t aged a week since the band’s commercial peak and Frank Hannon plays with a vengeance on the guitar and piano — his solos never sounded so good. Drummer Troy Luccketta and bassist Brian Wheat are solid as ever, and joining them is second guitarist Dave Rude.

Songs on Simplicity are easily the next progressive step from previous albums. For example, the first track “MP3” is the anthem leading the charge about technology, stating that it’s taken us from the ‘phonograph record to the MP3’. “Cross My Heart” is a good soul-filled blues jam with piano and mean guitar, reminiscent of “What You Give”. “Honestly” is a nice ballad with great vocal harmonies that pays tribute to those who put others ahead of themselves and are unselfish, while “Flip Side!” is another great acoustic jam that slams into a heavy blues alleyway. My favorite song on Simplicity is “Time Bomb”; it’s heavy, bluesy, and raunchy with a metalized speed demon solo — in the vein of “Heaven’s Trail”.

Tesla successfully kept this album simple, which is something they never had a problem doing. Tesla has always had knack for keeping it simple and not really changing lanes from the music that got them to the top in the first place. If you loved Tesla‘s previous albums, you will love this one too.